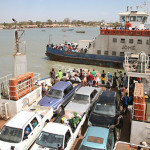 Back on 1 December 2016 Yahya Jammeh, Gambia’s president ‘for a billion years,’ lost an election and surprised much of the world when he said he’d accept the result and walk. Shortly after, to nobody’s surprise, he didn’t depart at all, but finally on 21 January 2017 ...

Last month Maureen and I had a short stay at a friend’s house in Marrakesh in Morocco. Our previous two visits to Marrakesh were in 2007 when we drove through on our way to Banjul in Gambia on the Plymouth-Banjul Challenge – nurse an old car down to West Africa and gi...