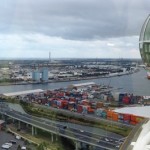 Riding the Melbourne Star – at last

. Melbourne’s big ferris wheel is finally back in operation. Back in 2009 – after I’d been for rides on the London Eye and the Singapore Flyer – commented on the sad story of Melbourne’s version. It opened on my birthday – 20 December 2008 – and shut down just 34 d...

During the year I flew lots of places and drove lots of places, but I also used a wide variety of other forms of transport. In my Fun & Fare Evasion blog I tell the story of being caught travelling without a ticket on the Budapest subway. I also ponder – in Sydney...