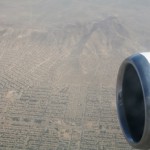 ‘Skiing, Sand and Shopping in the World’s Weirdest City’ is the subtitle and it’s a good summation. I’m overdue for another visit to Dubai, I’ve not been back for a few years, but I’ve been there quite a few times since my first visit in 1999. I’ve been intrigued by D...

In December I had two lost bag events in the past 12 months. Now it’s three. This time it was Emirates which left Maureen’s bags behind in Dubai (I was already in London), they had plenty of time to transfer the bags from one flight to the next so I guess the excuse w...