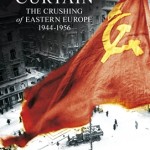 The subtitle of Anne Applebaum’s fascinating, but terribly depressing, tale tells it all. In the period from 1944, the year before the final collapse of Nazi Germany, to 1956, the year of the Hungarian Revolution, the Soviet Union truly did crush Eastern Europe. Af...