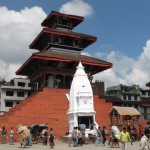 Before my recent trip up the Karakoram Highway through northern Pakistan to Kashgar in China I spent a day on a side trip to the Murree hill station and looking around Islamabad. On my last visit to Pakistan in early 2006 I went to the ancient Buddhist site at Taxila,...

I was in Haiti before the earthquake, so my April trip, kicking off from the Dominican Republic, was a return visit. Things are still a long way from back to normal. The tent camps are still everywhere although one right in the centre of the  capital, Port au Prince, ...

◄ The Faisaliah Tower in Riyadh, Saudi Arabia. The tower was designed by UK architect Sir Norman Foster and built by the bin Laden family’s construction company. After all the talk about Osama bin Laden hiding out in a cave in the unpoliced badlands along the Pakis...