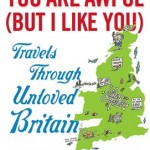 Tim Moore sets out on ‘Travels Through Unloved Britain,’ searching for all the worst places by whatever means you care to measure worst: unemployment, crime, health, pollution, ugly buildings, bad planning, you name it. To get from one miserable place to another he tr...

The Man who Invented the Bicycle

The engineers of Victorian-era Britain were inclined to churn out inventions in all sorts of fields. Some of them are well known, in particular the heroically named Isambard Kingdom Brunel who turned his hand to everything from massive ocean liners to railway tunnel...