My 103 day, Silk Road Odyssey from Bangkok to London in an old MGB is all over. ‘Burgundy,’ my 45-year-old car is safely in London and I’m looking for a new home for it, anyone want a well looked after English sports car? Comprehensively overhauled and then used for o... 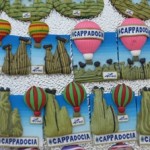 The next stop on our Turkey circuit was Göreme, Maureen and I were there way back in 1972 and we’ve never been back. ▲ Göreme is the principal village in the fairytale district of Cappadocia, noted for its lunar landscape of ‘fairy chimneys.’ Over the centuries the...

Lonely Planet’s Best in Travel 2011 stirred up the usual interest on its release. Assorted cities (including Tel Aviv and Australia’s Newcastle – not the British version) noted their inclusion in the ‘Top 10 Cities’ category. US Secretary of State Hillary Clinton, vis...