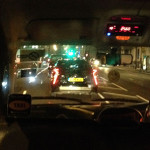 Take an Uber car from Kensington to St Pancras to meet some friends for dinner one night, the fare is £13. Coming back we go in a traditional Black Cab, same distance, perhaps the traffic is a bit lighter, £30. The following night it’s Uber again, this time to Cove...