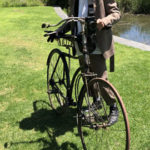 Cruising on an 1891 Overman Victor

I had a ride in Melbourne with the Vintage Cycle Club on their annual city cruise. I was riding an 1891 Overman Victor sprung frame ‘safety bicycle’ borrowed from the Farren Collection’s wonderful assortment of old bicycles. ‘Safety’ means it has equal-sized wheels an... 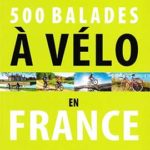 And it’s in French! Lonely Planet France has just published a guide to 500 great bicycle rides in France. Rides suitable for people from 7 to 77 they claim, whether you want rides with friends or family, by yourself or with your lover – well it is French bicycle ridin... 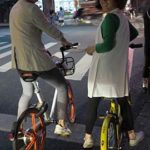 I’ve been riding bikes in Shanghai and Beijing, on my MGB Silk Road trip across Asia. On my first visits to China there were lots of bicycles. Over the years the numbers went down and down, part fashion (people wanted cars) and part government policy (cars were tomorr... 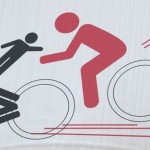 ▲ On a recent visit to Turin in Italy I encountered this nice bicycle warning, admonishing cyclists not to go speeding down the laneway next to the Egyptian Museum, scattering pedestrians in all directions. ◄ I posted a recent photo of something I encountered o...

10 Years of the Tour d’Afrique

Crazy, doomed, hopeless, wonderful – my first thoughts when I read about the very first Tour d’Afrique – 12,000km, four months, all the way from Cairo in Egypt to Cape Town in South Africa. It really is the Mt Everest of cycling. I didn’t realise that a few years late...