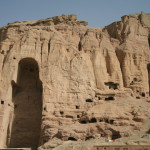 Criticising a book or a film without reading it or seeing it is never a good idea. But there are two recently released books, and from opposite ends of the political spectrum, which I’m not going to waste my time reading. First there’s George W Bush’...