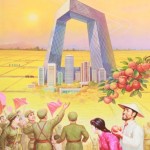 Yesterday I posted about Melbourne’s (temporary) MPavilion. After I wrote that piece I went to a session at the pavilion about Chinese filmmaker Yang Fudong. There’s a current exhibition on his works at ACMI – the Australian Centre for the Moving Image. The Yang Fu...

▲ Our Korea guidebook has a section on Architecture as Art in the Seoul chapter. Featuring the Kring Gumho Culture Complex ‘looking like a giant music speaker crossed with a slab of Swiss cheese.' (Unsangdong Architects) ▲ Just down the road is the I’Park Tower...

My Brazil visit concluded with five days in São Paulo, the biggest city in Brazil and with a population of around 20 million one of the biggest in the world. It was a working visit so I didn’t get much chance to look around, but I was surprised that it was a much easi...