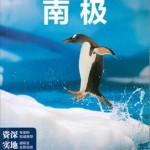 ▲ Maureen in Antarctica in 1997. When Lonely Planet published its first Antarctica guide in 1996 it felt like a pioneering project. In fact I remember having to work hard to convince some people in the company that it was a feasible idea. Were there really enough...

Judith Schalansky’s book was originally published in German and won design awards. It’s a delight, a weird and wonderful assortment subtitled ‘Fifty Islands I Have Never Set Foot On and Never Will.’ Each features a map and a short and often intriguing essay which migh...