Across Asia on the Cheap: 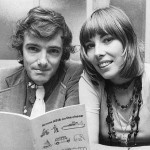 Way back in 1973 Maureen and I published the first Lonely Planet guidebook. We were living in a basement flat in the Paddington, a suburb of Sydney. That's Maureen 37 years ago at the kitchen table where we put together that first book. She's still a Dylan fan. &nb...