Winding down a road to the north coast of Kangaroo Island a few weeks ago I came across this house name, the title of a favourite book. Arthur Ransome’s Swallows & Amazons was the last book my parents ever read to me and by the end I was becoming thoroughly fed up with being read to; it was faster to read it myself. Curiously 30-odd years later it was the last book I ever read to my own daughter, same copy too. 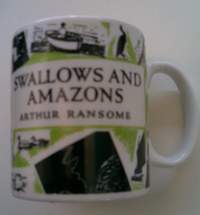 Swallows & Amazons is a very old fashioned tale of a bunch of kids sailing around a Lake District lake, camping on an island and having all sorts of adventures. Parents only appeared very peripherally, they popped up occasionally to say ‘neat campsite, well done guys’ and you could always pop in at their lakeside place when the food ran out, but otherwise they kept right out of the picture. First published in 1930s there’s also a solidly feminist streak to Ransome’s book. Amazon’s crew are two girls, of course, and they’re perfectly capable of keeping up with Swallow’s male-led crew.

Ransome was first and foremost a sailor, he wrote adult books about sailing as well, and the romance of sailing was obviously an attraction but, years later, when I finally learnt to sail I quickly discovered I was a lousy sailor, although at least I never get seasick. The maps were a major attraction, ever since Swallows & Amazons I’ve been a sucker for books with maps. Probably Lonely Planet only existed to fuel that passion.