Why have I never been to the Indonesian island of Sumba? The islands of Nusa Tenggara run in a chain to the east of Bali – Lombok, then Sumbawa, the Komodo Islands, Flores and finally Timor. In the middle Sumba is centred just to the south of Sumbawa-Komodo-Flores. Over the years I’ve been to all the major islands of Nusa Tenggara (there are lots of smaller ones), but Sumba has evaded me. My Komodo Islands boat trip last year should have included Sumba, but the weather turned against us and we never got there.

So in 2019 I slotted in a short Sumba visit as a preliminary to the 2019 edition of the wonderful Ubud Writers & Readers Festival in Bali. Now why do people visit Sumba? Three reasons – beaches & surfing, the Pasola festival and ikat. 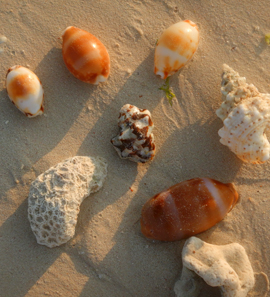 ◄ Beaches and surfing. I gathered these shells in a minute or so on the beach at Oro on the north coast near the Tambolaka Airport when I stayed at the very pleasant Oro Beach Hotel. I’m a little too old to be taking up surfing in this lifetime, but I certainly enjoyed the Sumba beaches and I know rich surfers head south to the very pricey Nihiwatu Resort on Pantai Nihiwatu. 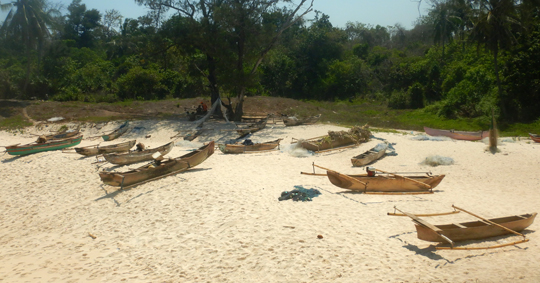 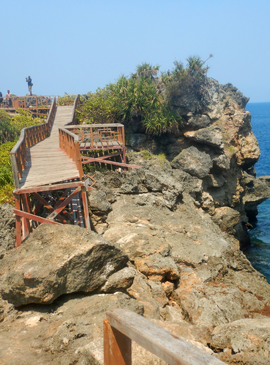 ▲ There are plenty of fine beaches around the island. This little fishing fleet of outrigger canoes is drawn up on the sand on Mandorak Beach at the western end of the island.

◄ Not everything around the coast has worked out so well, just north of Mandorak Beach is the Weekuri Lagoon, a rather beautiful shallow lagoon encircled by a wooden walkway over the razor sharp coral rock. The Southwest Sumba tourist leaflet shows this photogenic lagoon on the cover and notes that ‘Concerned about the situation the, local authority provides wooden bridge for tourists to walk unharmed.’ Unfortunately the local authority haven’t maintained the wooden bridge which has totally collapsed in places, forcing the unlucky tourists to take their luck in clambering over the razor sharp coral! 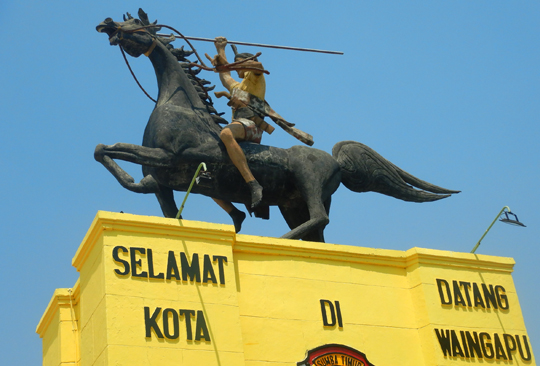 ▲ The big Sumba festival is Pasola in February-March each year. According to Lonely Planet it’s one of the ‘most extravagant (and bloodiest) harvest festivals in Asia. Ikat-clad, spear-wielding teams of horsemen charge at each other’ and the size of the Pasola grounds and spectator seating stands which I passed by clearly illustrates that it’s a major attraction. At the entrance to town of Waingapu these statues show Pasola contestants. 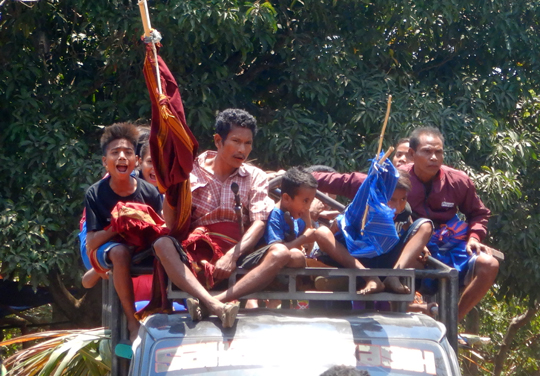 ▲ I did catch a festival at Tossi with truck-after-truck turning up, each loaded down with festival goers and toting a large pig to be sacrificed – or so I was told – later in the day. Fortunately I got away before any pig-blood flowed. This was a ceremony to cement village and ancestor relationships, 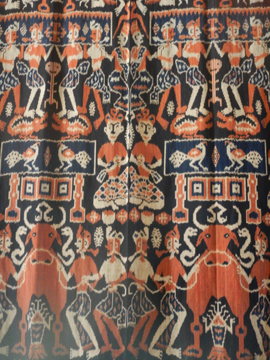 ◄ And ikat. Ikat is ‘fabric made using an Indonesian decorative technique in which warp or weft threads, or both, are tie-dyed before weaving.’ So the pattern is established before the weaving ever takes place. You can find ikat at various places in Indonesia, but for connoisseurs of the art Sumba is ground zero. I certainly saw ikat being produced and on sale as I travelled Sumba, but I’m no expert and I’d be very reluctant to lay out the big money which high quality Sumba ikat requires without knowing what I was shopping for. 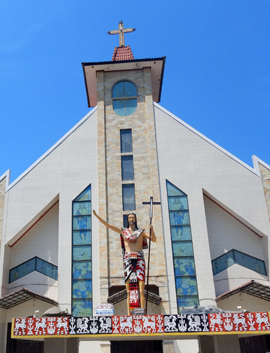 ◄ Indonesia may be predominantly Muslim, but assorted other religions (Hinduism in Bali for example) have their followers and Sumba is predominantly Christian as the many churches, this one is in Waingapu, illustrate. All those pigs lined up to be sacrificed at the Tossi festival are another indicator that Islam is not the religion of this island. 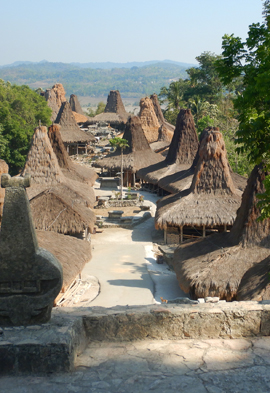 The traditional villages with their high peaked thatched roofs are a big attraction for Sumba travellers. Every village has a guest book where visitors should sign in and make a contribution – typically about 20,000 rp ( US$1.50) per person. A gift of betel nut for the village elders, who are typically lounging around the guest book, is a good idea as well. With my guide we made a market shopping trip to stock up on betel nut before we started out.

◄ Kampung Praiijing, near Waikabubak – this was one of the most organized traditional villages we visited. The guest book had been superseded by an entry counter where you were charged 55,000 rp (about US$4) and given a wristband! Like most villages the houses form two lines with an open space between them. 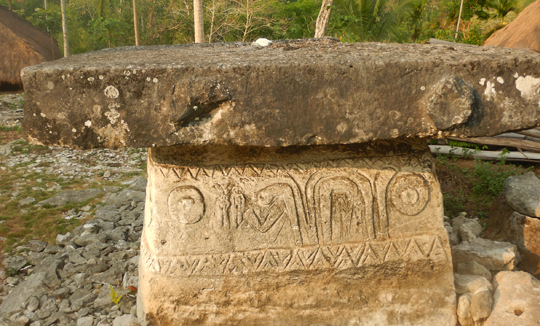 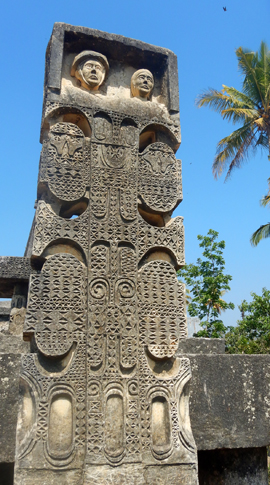 ▲ Tomb in the village of Weeleo. The village tombs typically occupy the space between the lines of houses. The often gigantic tombs are topped by a slab, stone in a traditional old tomb, concrete on modern versions.

◄ At Gallu Bakul in Anakalung in central Sumba there’s a tomb featuring these intricate carvings and a stone slab said to weigh 80 tonnes, the biggest in Sumba. 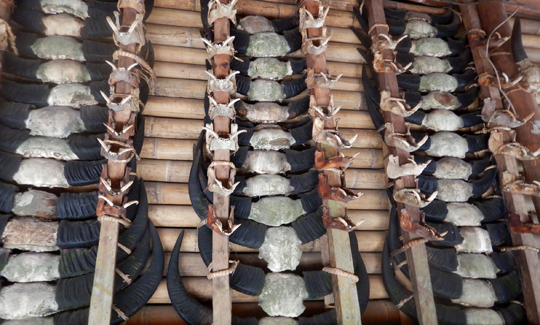 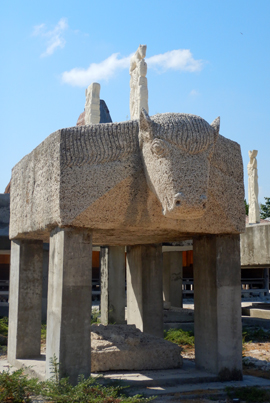 ▲  Numerous buffalo horns and pig jawbones in a house in Weeleo proved there had been plenty of village sacrifices here over the years.

◄ Right at the eastern end of the island the village of Praiyawang at Rende, just past the town of Melolo, includes a large collection of imposing tombs including this king’s tomb made to look like a buffalo. 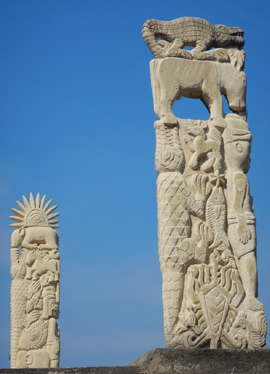 All the tombs in this traditional village featured ornate carvings. ►

The sculptures were all set as columns on top of the tomb slabs and it was clearly an ongoing activity, more columns were being sculpted while I was there. My Sumba travels had started at Tambolaka towards the western end of the island. I’d then travelled west right to that end before doing a U-turn and heading back to Waikabubak in the centre and then to Waingapu towards the eastern end. Finally I’d travelled right to the eastern extremity so I’d pretty much covered the island from end to end, although not down to the south coast. Although Sumba is seeing a lot more tourists these days I certainly didn’t bump into many of them.