Spending so much time studying the coronavirus statistics it’s almost a relief that Sir Stirling Moss – ‘the greatest driver never to win the World Championship’ – was taken by straightforward old age on 12 April 2020, at 90 years old. 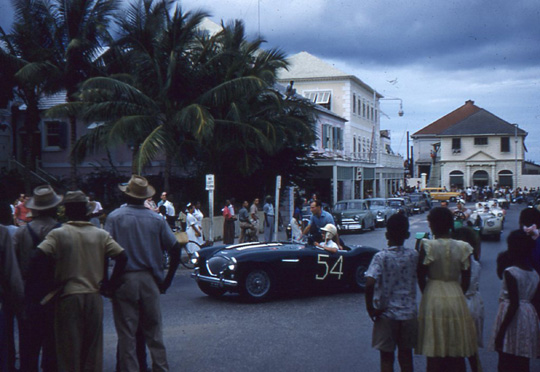 ▲ I had a spell following motor racing – well it often involves travel – but the first car race I ever saw featured Stirling Moss. As a child I was living in Nassau in the Bahamas – my father was working there – and in 1955 I saw him drive during the Bahamas Speed Week races. I was standing beside my father when he took this photograph of Stirling Moss – in the blue shirt – being driven through the streets of Nassau in ‘Lady Oakes’ Austin Healey.’ She drove that car in a race for Bahamas residents and it may have been the same Austin Healey which Moss drove in one of the main races. Lady Oakes was Danish, Greta Hartmann, and she married Sir Sydney Oakes in 1948. He was the son of Sir Harry Oakes, who was murdered in mysterious circumstances in Nassau in 1943, possibly by his wife’s lover? Books were written about the murder and a film was made. Greta and Sydney divorced in 1956 and he was killed in a single car crash in Nassau in a Sunbeam Alpine in 1966. 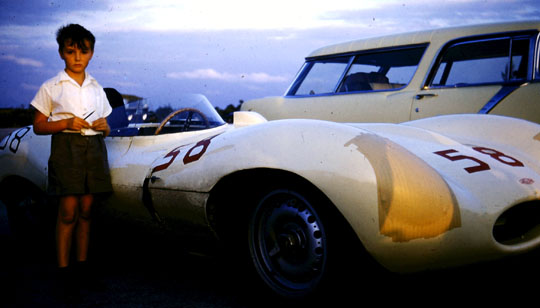 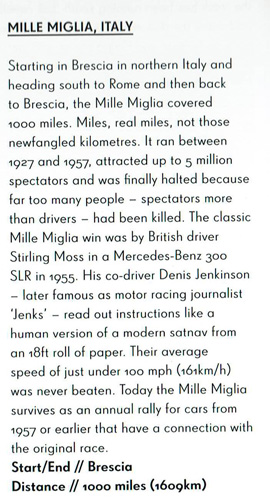 I’ve posted about Nassau and car racing before, including a model of the car in which the Marquis de Portago won one of the Speed Week Races that year. I collected the signatures of Stirling Moss and Alfonso de Portago for my autograph book.

◄  That same year Stirling Moss with his navigator Denis Jenkinson won the classic Mille Miglia road race in Italy and I wrote about that 1000 mile (not km) circuit which you can still follow today for Lonely Planet’s Epic Drives book. It was de Portago’s terrible crash in the 1957 Mille Miglia which ended the extraordinarily dangerous race.

The Mille Miglia was probably Stirling Moss’s most famous victory and his navigator, Denis Jenkinson. ‘Jenks’ as he became known, became the ‘Continental Correspondent’ for Motor Sport magazine for many years.

That meant he drove from Grand Prix to Grand Prix and to many other races around Europe to report on them, you didn’t fly in those days. For years his transport was a Porsche 356, then later a Jaguar E-Type, and as a teenager, enthusiastic about motor racing and travel, I couldn’t imagine a more interesting occupation. I even wrote to ‘Jenks’ once and to my surprise got a very polite and detailed reply, I wish I’d kept the letter.