▲  Flying out of London to Morocco a few weeks ago we passed just north of the Isle of Wight, with the whole island framed in my window. Earlier this year we sailed around the southern coast of the island and then up the Solent into Southampton on board the Queen Mary 2 out of New York.

▲ My family were from that area and I spent some time there as a small child so I returned for a look around. Starting with the Southampton Aviation Museum with this fine old Solent flying boat. I’ve got two connections with these magnificent old four-engined aircraft. The first flight I ever took – I was one year old at the time – was on one of these. We flew out of Southampton, boarding the aircraft just a few hundred metres from where the museum is today, and arriving in Pakistan three days later! Flying wasn’t fast in those days. I was back in Pakistan in September this year, travelling up the Karakoram Highway and into China.

The other connection is this particular aircraft used to be operated by Ansett Airlines out of Sydney Harbour to Lord Howe Island. I remember seeing them arriving and leaving when I lived in Sydney in 1973, a year later they ceased operation. Earlier this year I flew right over Lord Howe Island, en route to Los Angeles from Melbourne. 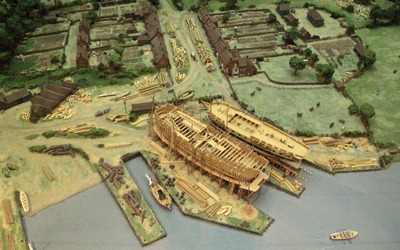 ▲ My next museum stop was at Bucklers Hard, the tiny village just south of Beaulieu where dozens of Royal Navy warships were constructed in the 1600s, the prime era of the age of naval sailing ships. The village is remarkably unchanged today and there’s a fine little museum explaining all about wooden ship construction and featuring this model of Bucklers Hard in its boat building prime. 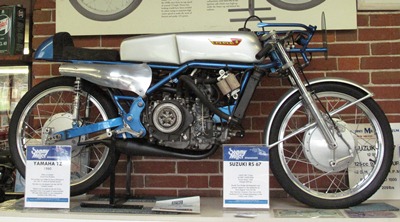 ▲ I stayed overnight in the Master Builders Hotel and the next morning walked along the riverside a few km to the larger village of Beaulieu with its famous Motor Museum. Much less well known, however, is Sammy Miller’s Motorcycle Museum a few km to the west in New Milton. A multi-talented motorcyclist particularly famed for trial riding (traverse a tricky course without falling off or putting a foot down) he’s built up an amazingly diverse collection of old and new motorcycles like this wonderfully complicated 1967 Suzuki 125cc V4 grand prix bike. It was an era when absolutely anything went and as a result you ended up with amazingly intricate devices like this miniature masterpiece with its four tiny cylinders.