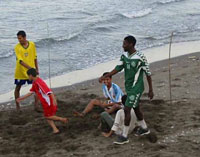 Before dinner on Saturday night we’d gone down to the beach in the centre of town where an energetic football game was being fought out on the narrow strip of sand between sea and road. Dinner had been notable for the almost 100% female occupancy of the hotel restaurant, most of them flirting with the Indian guitarist playing western easy listening in the background.

The next morning was a day of forts, Oman is noted for them and four of the five forts we visited were big, beautifully restored and very impressive. Sohar, with its interesting fort museum (this is a town with a long history) was our starting point. Before we arrived at our stopping point for the night, we’d explored the forts at Al Hazm, Rustaq and Nakhal from subterranean secret passages to tower top lookouts and already it was becoming a case of deja fort.

The beautiful fort at Al Hazm had been one of the highlights, in large part because of the energetic guide who, after a pause for coffee and dates, had us crawling down secret passages, edging along ledges in darkened tunnels and popping out of hidden escapes, all while giving us his impassioned run down on Arab world politics. 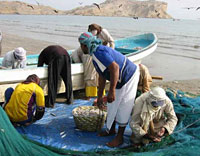 At dusk we arrived at Al Sawadi, a hotel mainly occupied by German-speaking package tourists – the warning that pool loungers cannot be claimed for the day was an indication of the clientele’s nationality. A Sri Lankan trio (Chill Out) played in one bar during happy hour while a Filipino girl group (D’Friends) managed the other. Plus there were two different buffet dinners and this is not a particularly large hotel. None of the computers in the hotel’s internet cafe would function and the hotel staff couldn’t figure it out until the female singer from the Sri Lankan group dropped in and showed them how to reconnect the local network.