Before returning to Australia for a statutory 14 day spell of self-isolation I was on the Yemeni Island of Socotra, staying in its main town, Hadibou. Socotra has been described as the ‘Galapagos of the Indian Ocean,’ but it’s the plant life which is of greatest interest. Socotra is home to over 300 endemic plant types, vegetation found nowhere else on earth. 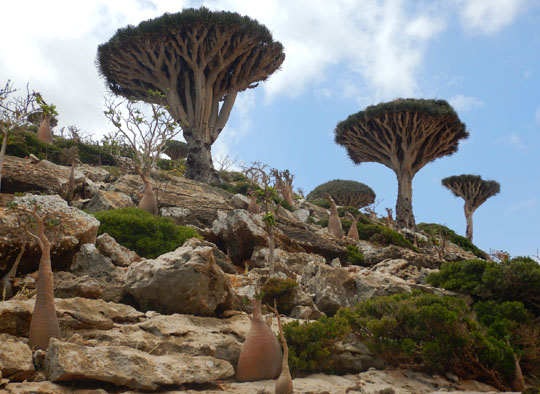 ▲ The Dragon’s Blood Tree is the iconic Socotran tree although technically it’s not a tree at all although it’s hard to accept that it’s a member of the lily family. The tree’s sap – that red dragon’s blood – finds a multitude of uses from medicinal (from healing gladiators to inducing abortions), as a makeup (dragon’s blood lipstick?) or for dyeing anything from violins to old book covers. The tree – or lily – goes through distinct phases in its life, starting shrub-like, moving into its ‘shaving brush’ stage of a tall trunk topped by a top-knot, then its ‘inverted-umbrella’ adolescent stage before moving into its mature mushroom shaped adulthood. 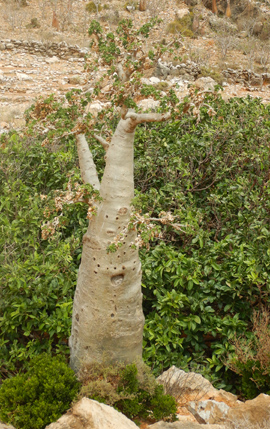 ▲ Yes, these are young Dragon’s Blood Trees in Abede Abdullah’s nursery near Hadibou. Although there seem to be plenty of mature trees in the hills, they grow above 300metres altitude, there are few young trees. Are they eaten by Socotra’s prolific goats? Or another victim of climate change? Whatever the Dragon’s Blood Trees Nursery is trying to grow young trees to replant in the hills.

◄ Socotra has an assortment of different bottle trees like this cucumber tree. Bottle trees look remarkably like smaller versions of the baobab trees of East Africa and Madagascar. Or Western Australia’s boab trees, the only baobab outside Africa and Madagascar. In fact they are a different species and none of them stranger than the cucumber tree, which is nothing like what we put in our salad.

Having put all that effort into growing its bloated trunk the cucumber tree simply seems to give up, concluding with a miserable little tangle of branches and leaves. 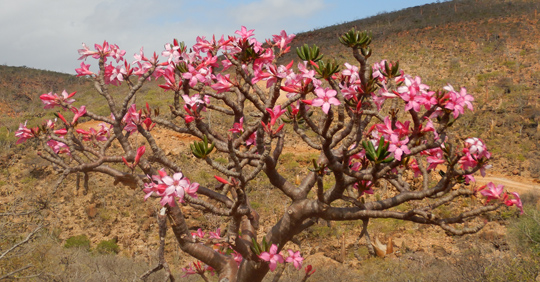 ▲ The Desert Rose, on the other hand, produces beautiful pink flowers although the Socotran name for the tree is isfid, ‘useless’ because they’re poisonous and really can’t be used for anything. Pretty though they are.

◄ Mabel Bent, Anglo-Irish, an inveterate traveller and Socotran enthusiast, visited the island in the 1890s and described the Desert Rose as ‘the ugliest tree in creation, with one of the most beautiful flowers: it looks like one of the first efforts of Dame Nature in tree-making, happily abandoned by her for more graceful shapes and forms.’ 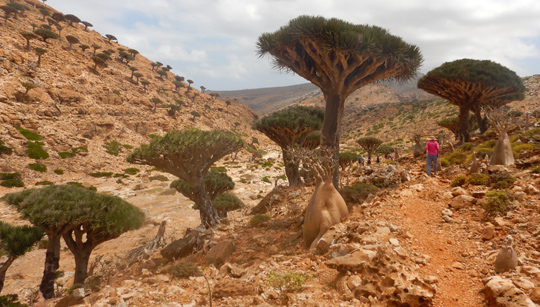 ▲ Dragon’s Blood Trees and bottle trees on the descent to the Homhil rockpool. 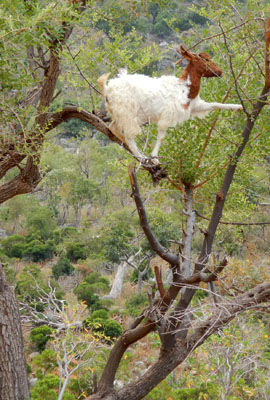 ▲ They’re not unique to Socotra, but the island is also noted for its frankincense trees, yes that Christmas present the wise men took to Bethlehem along with gold and myrrh. When we passed through this stand of frankincense trees on our way to Homhil local children appeared selling little bags of frankincense for 1000 Yemeni rials, about US$1.50.

◄ Socotra’s goats are certainly not unique to the island either, but there are plenty of them whether they’re hassling visitors for food, rooting around in the plastic garbage of Hadibou or, like this one in the Ayhaft Canyon, adeptly climbing a tree for some tasty leaves. 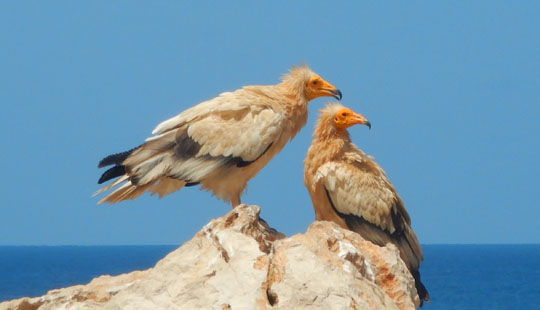 ▲ Also good at hassling visitors Socotra’s Egyptian vultures, also known as Socotran buzzards, are remarkably attractive birds. For a vulture. This handsome pair were looking for anything they could scavenge from us at our lunchtime stop near the Arher Dunes. 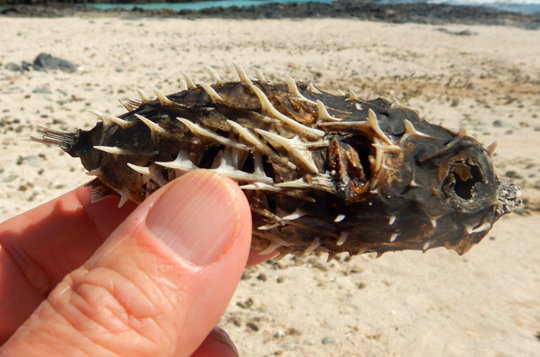 ▲ Of course there’s underwater life all around the island although this unfortunate little porcupine fish was one of a host of them blown off the waves on a windy day at Ras Erisel, the eastern end of the island where the Arabian Sea meets the Indian Ocean. 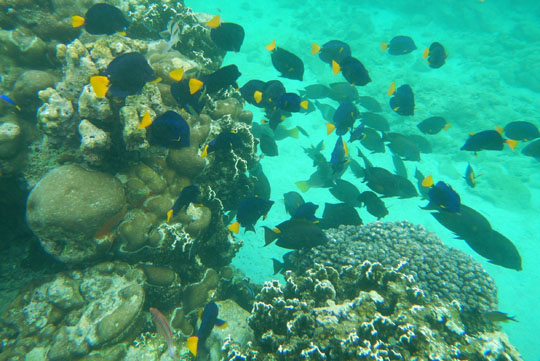 ▲ There was no shortage of tropical fish around the coral reef right offshore from our campsite at Dihamri.