In fact Diccon Bewes claims to have just taken one slow train on his Swiss jaunt (in fact there were quite a few) while Tom Chesshyre happily confesses to riding lots of them on his oh-why-are-we-doing this pre-Brexit tour of Europe. 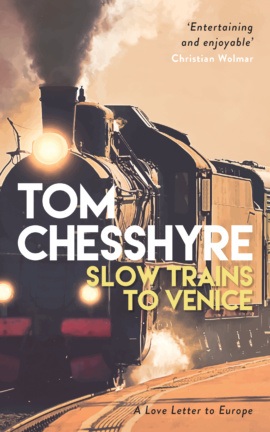 Not all of Tom Chesshyre’s train rides in Slow Trains to Venice are slow, it seems to be impossible to find a slow train (or slow anything else) in Germany, but plenty of them are. On his pre-Brexit tour of everything Britain might be losing Tom finds the same response almost everywhere he goes: Why on earth did you do this? We wish you hadn’t. But also the same questions seem to worry his slow train fellow travellers everywhere he goes: the impact of immigration is certainly one of them and wasn’t that a big factor for the Brexit movement?

En route to Venice Tom starts from London, dips into France, then crosses Belgium, a corner of the Netherlands, Germany, Poland, into Ukraine and down to Odessa (a favourite destination for me last year) before heading back through Hungary, Serbia, Croatia, Slovenia and Austria before turning south into Italy to conclude at Venice. Quite a European tour. 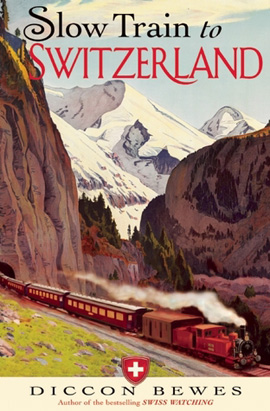 Diccon Bewes’ Slow Train to Switzerland follows three stories. First there’s Jemima Morrell’s 1863 exploration of Switzerland, a story traced through the meticulous diary she kept of her travels. Second there’s the Thomas Cook story, Jemima and her fellow Junior United Alpine Club travellers were pioneer participants in Thomas Cook’s first Swiss adventures, the major stepping stone to the company becoming a tourist business giant. The third element is Switzerland itself, at the time a brand new republic and very far from today’s smugly affluent Alpine nation. Back in 1863 Switzerland was mainly rural and often quite impoverished, certainly nowhere near as wealthy as Britain.

Today, of course, Switzerland’s financial bottom line is way healthier than Britain’s and it’s Chinese who are the big tourist numbers, not the British.

Looking back to 1863 it’s remarkable how much easier travel has become, Miss Morrell and her fellow Alpine Club members are hardy travellers compared to today’s pampered tourist softies. It’s also remarkable how far up the mountains so many Swiss glaciers have retreated, certainly the inhabitants of Grindelwald are no longer worried that their village could be ‘crushed by the advancing ice.’