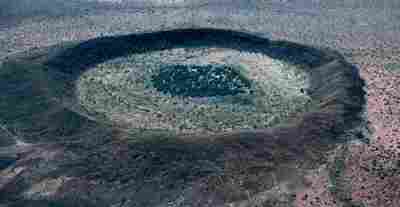 Every now and then I pick up a ‘got to go there’ book, you read it or look at the pictures and that’s what you immediately think. Judith Schalansky’s Atlas of Remote Islands was a fine example, she claimed she hadn’t been to any of the 50 weird and wonderful islands in her book. I could put ticks beside just five of them – Rapa Iti (in the Austral group of French Polynesia), Robinson Crusoe Island (off Chile), Easter Island (even further off Chile), Pitcairn Island (keep travelling west) and Deception Island (Antarctica), but I’d like to add some more. 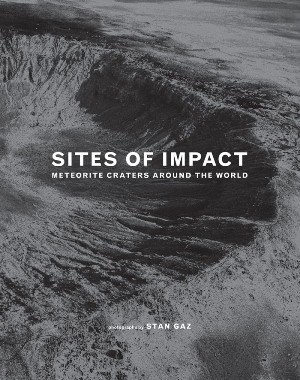 ◄  The Stan Gaz photo- graphs in Sites of Impact – Meteorite Craters Around the World is certainly in the same category with its eerily beautiful black & white photo- graphs of 10 meteorite craters. I’ve been to three of them – all in Australia – which leaves another Australian crater, three in the US, one in Canada, one in Namibia and one in South Africa to think about.

Back in 1994 I was only 43 miles from Meteor Crater in Arizona, USA when I stopped in Flagstaff on Day 8 of our family coast-to-coast in a 1959 Cadillac trip. Why didn’t I make the detour to that crater back then?

The crater in the book which I’d really like to see is, unfortunately, one of the most difficult to reach – the New Quebec (aka the Pingualuit or Chubb Crater). Check it out on Google Earth at 61° 17’N, 73° 40’W – that’s way north in Canada, Hudson Bay to the west, Greenland to the east.

Equally remote is a crater Stan Gaz regrets he didn’t reach, the Tenoumer Crater out in the Sahara desert in Mauritania – 22° 55’N, 10° 24’W on Google Earth and it looks fabulous. And a long way from anywhere. How close have I been to that crater? Well in 2005 Maureen and I flew up the west coast of Africa in an old Convair 580 aircraft. The day we flew from Timbuktu, Mali to Marrakech, Morocco we would have started out about 700km south-east and got a little closer (but not much) as we flew north.

Two years later we drove from London to Banjul in Gambia on the Plymouth-Banjul Challenge – Africa or Bust we dubbed that trip. As we drove down the coast of Morocco through the Western Sahara region and into Mauritania we were about 500km from the crater. 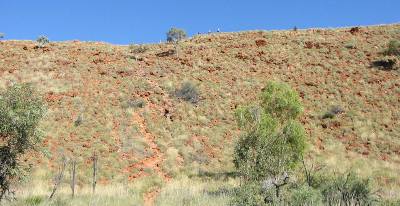 ▲   I’ve been to the Wolfe Creek crater in Western Australia twice. Flying over it on a plane on one occasion and then driving to it along the Tanami Track from Alice Springs.