My Brazil visit concluded with five days in São Paulo, the biggest city in Brazil and with a population of around 20 million one of the biggest in the world. It was a working visit so I didn’t get much chance to look around, but I was surprised that it was a much easier city to cope with than I’d expected: 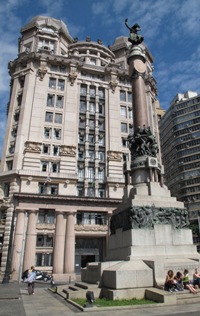 Bad traffic? Oh come on, compared to Tehran, Cairo, Beijing, Delhi and a half a dozen other cities I can think of the traffic is a breeze. ‘Well it was good while you’ve been here,’ I was told.

Sprawling and takes forever to get anywhere? Not compared to Seoul (so much traffic over such a large area) or even Melbourne (so much area).

The Praça de Páteo do Colégio marks the spot where the city was founded in 1554 and features a replica of the original monastery at the site plus this towering column to commemorate the foundation.


São Paulo has some interesting architecture, particularly in the city centre, like the Edifício Copan, a classic by the modernist architect Oscar Niemeyer. It’s noted for its curvaceous frontage with narrow ‘brise soleil’ ledges.

To the left the 1939 BANESPA (Banque de São Paulo) building is the city’s equivalent of the Empire State Building and has a fine view of the city centre from its (free) observation deck. Unfortunately they’d changed the opening hours so I didn’t get to look. To the right is the Edifício Martinelli, a 1929 Beaux Arts structure that ‘seems to have been imported wholesale from turn-of-the-century Manhattan’ according to our Brazil guide. 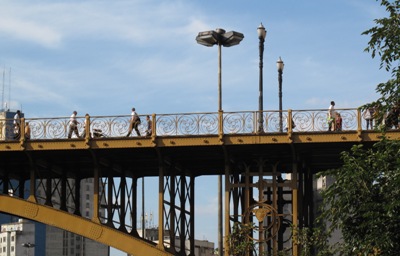