Santo Domingo in the Dominican Republic

Maureen and I flew in to Santo Domingo from New York, spending a few days in this fine old colonial city before taking a bus to Port au Prince in Haiti. There’s not a lot to see in the DR’s capital, but it’s easy enough to spend a couple of days wandering the Zona Colonial admiring the Spanish era buildings and statues.

◄  Like this one of Juan Pablo Duarte, one of the founding fathers of the Dominican Republic.

But lounging at cafes, this one is on the Parque Colón, is another fine way of passing the time in Santo Domingo. ▼ 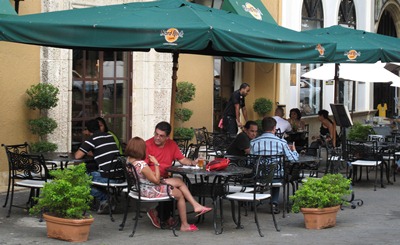 My favourite sight was the Faro a Colón (Colombus Lighthouse), which was inaugurated in 1992 (Pope John Paul II turned up for the event and his Popemobile is parked outside) to commemorate the 500th anniversary of the arrival of Christopher Colombus. When it’s lit up the cross-shaped ‘lighthouse’ is said to emit a light you can see from Puerto Rico, 300km away. The only problem is DR doesn’t have much electricity to spare and it’s said that if you turn on the lighthouse every other light in the country blacks out. Our guidebook accurately describes it as looking like a cross between a Soviet-era apartment block and a Las Vegas take on a Mayan temple. ▼