The original capital of Portugal’s Brazil colony, until it was shifted to Rio in 1763, colonial Salvador was a glittering city of wealthy mansions and gold-leafed churches. It’s still a dazzling city although today it’s a crumbling and ragged glory. It reminded me of Naples in Italy and like Naples visitors are regularly warned about scams, pickpockets and petty thievery. I liked it and certainly didn’t feel unsafe on the streets. 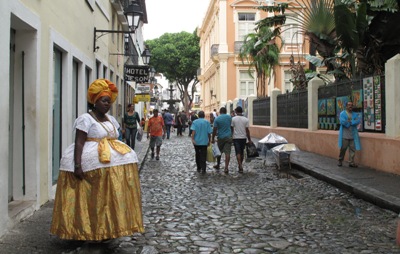 The cobbled streets of the Pelourinho district marks the centre of the Cidade Alta, the oldest part of the town. 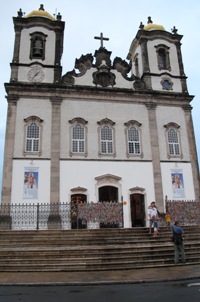 The Igreja Nossa Senhora do Bonfim is a Bahia favourite combining Catholicism with the local African based religion Candomble. Plus it’s a place for miraculous cures (just leave a reproduction of the bit of you needing work). Plus this is where Salvador’s fita come from, they are the colourful strips tied on the fence. Tie one on your wrist, with three knots, and your three wishes will come true. So long as you leave it there until it falls off, which takes a long time now they’re made out of some sort of nylon material. Cut it off and you die. Or at least your wishes don’t come true. 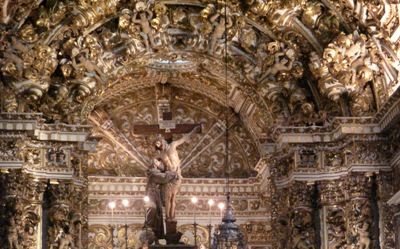 The Igreja e Convento Sâo Francisco is absolutely over the top, all gold-leafed carvings and writhing figures including a bunch of little cherubs which, according to the popular story, were castrated because their carvers turned them out over-endowed. 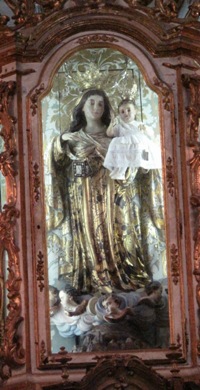 The Igreja da Ordem Terceira do Carmo has a notable statue of Nossa Senhono do Carmo (aka the Virgin Mary) by the slave artist O Cabra over the altar. The ‘scandalous statue,’ according to our Brazil guide, was modelled on the likeness of Isabel II and, it’s said, the Christ-child might look like what O Cabra imagined their love child would look like.

A few days before my Salvador visit huge rainstorms hit Rio de Janiero and it was certainly wet and windy when I was in Salvador. Still every cloud etc, as these surfers demonstrate, they’re seen from the lighthouse, fort and museum of the Forte de Santo Antônio da Barra. 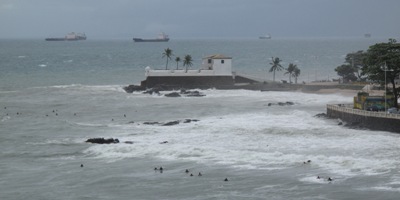