I’ve got a number of Robert Powell paintings hanging in my house, like this one of Preah Khan dancers at Angkor Wat which hangs over my bed.

So a visit to Robert’s house on the Thai island of Ko Samui was a good excuse for a stopover between Melbourne and London in July. I’ve already blogged about my encounter with a bird song contest while I was driving around the island. 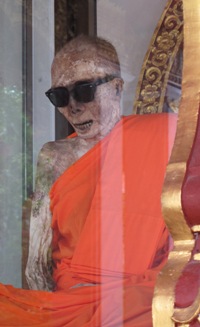 Other stops included a visit to Wat Kunaram, where a head monk’s naturally mummified (‘underdecomposed’ the sign says) body, complete with stylish sunglasses, sits in a glass showcase. 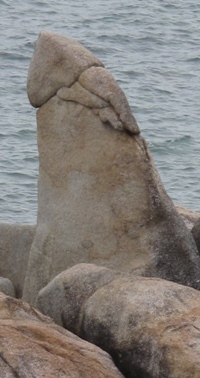 And to Hin Ta and Hin Yai, Grandpa and Grandma rocks. Grandpa is very phallic, Grandma the female equivalent. They’re nice natural rock formations, but like so much of Ko Samui reached via an obstacle course of tat and rubbish. Much of the island really is an unattractive mess

Recent additions to the island’s tourist attractions include Wat Plai Laem’s 18-armed seated figure of Guanyin, the Goddess of Mercyand a similarly sized fat Chinese Buddha. These two recent kitsch attractions were financed by the Bangkok Airways boss, who clearly has philanthropic instincts, even if they aren’t combined with good taste. 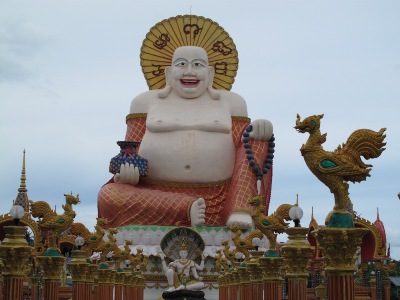