• ‘The old Struggletowners, if they could see it now, would not believe their eyes.’ In Struggletown, Janet McCalman takes us into the inner-city industrial working-class suburb of Richmond, in Melbourne, before the gentrification of the 1970s. This is a narrative richly informed by the voices and memories of those who lived there during this time-the Struggletowners themselves-as well as by McCalman’s familiarity with the objects, buildings and topography of their physical environment and her impressive awareness of larger social forces, structures and patterns. As urban life continues to develop in new directions and complex human and political relations suggest new futures, the difficulty and necessity of remembering, now, also lends this classic work a palpable new relevance.

I lived in Richmond for the largest part of my life in Melbourne and I’ve posted about the suburb on several occasions. On 2018 on some of Struggletown’s modern architecture and more recently in 2021 I even mentioned the Greek restaurant where we were regulars in the late ‘70s and early ‘80s, 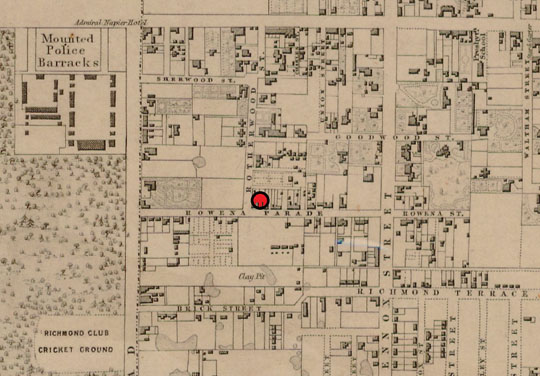 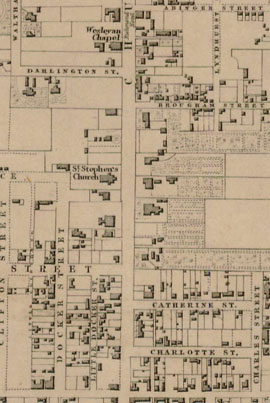 ▲ There was an earlier Richmond, prior to Janet McCalman’s 1900 to 1965 study and it was interesting to study this 1855 map of the area. The red dot is where I lived for a long spell on Rowena Parade, but in 1855 Richmond was still the odd house and lots of empty space in between. The Mounted Police Barracks back in 1855 is now a select old corner of East Melbourne and the site for many years of Yarra Park School.

◄ Looking at that old map along Church St you can see the Anglican St Stephen’s Church and, a little further towards Bridge Rd, the Uniting Church, originally the Wesleyan Chapel was also there. The foundation stone for the towering Catholic St Ignatius Church, in between the two and right on the top of Richmond Hill was not laid until 1867 and the spire was not completed until 1928. 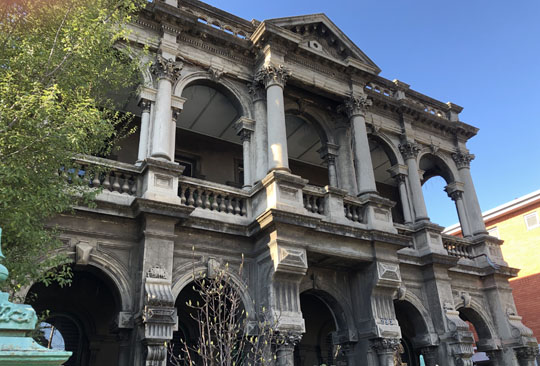 ▲ On the other side of Church St Lalor House – often cited as Richmond’s most magnificent house – was not built until 1888 by Joseph Lalor, the doctor son of Peter Lalor the leader of the historic gold-miners’ uprising at the Eureka Stockade in 1854. Peter Lalor died in the house in 1889. You can still see the ‘Surgery’ announcement in stained glass over the side door.

That early Richmond disappeared into the tightly packed workers’ housing and factories of the Struggletown story when for many years this was the definition of an Australian slum. Richmond’s turn around started after WW II as ‘new Australians’ arrived, particularly the Greek population which made Richmond their own. Richmond was part of Melbourne’s major post-war public housing redevelopment, sub-standard houses were condemned and cleared and the Housing Commission high rise flats sprung up around the city.

I arrived as part of the ‘gentrification’ of Richmond which kicked off from the late ’60s and into the ‘70s, yes I was one of the young people who saw Richmond’s Victorian houses as attractive, liveable and conveniently close to the city centre, not as festering slums! The next Richmond immigrant influx arrived pretty much at the same I did, when the first Vietnamese ‘boat people’ turned up in Darwin from 1976. The new Vietnamese residents rejuvenated the Housing Commission flats and turned Victoria St into Little Saigon with jewellery shops, food stores, travel agents and the multiple Vietnamese restaurants which turned Melbournians on to the food of Indo-China. Unfortunately they also turned Richmond into Melbourne’s heroin central and the drug trade has caused huge damage to the Victoria St era which for a spell had been so vibrant. 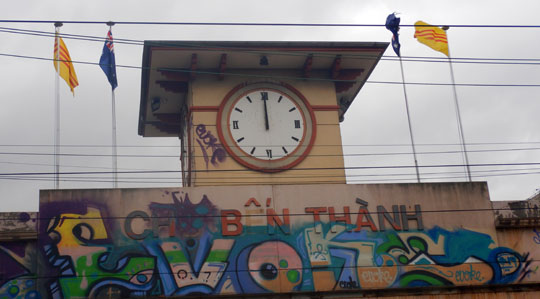 ▲ Bến Thành Market on Victoria St is modelled on the famous market of the same name in Ho Chi Minh City (Saigon) in Vietnam. Graffiti and some maintenance needs does not add to the homage.

Janet McCalman’s book ends just before those new arrivals closed the story on Struggletown and pulled back the curtain on today’s often glossy inner city suburb. The 20 years after her 1965 end date also saw the upheaval of Richmond’s Labor Party politics. Richmond had always been a centre for Labor Party activity and the famous ‘split’ of 1955 certainly had an impact in Richmond. Crudely put the split divided Labor into a right-wing Catholic-dominated faction and a left-wing union one. Local Richmond politics degenerated into family-run corruption which inevitably collided with the new, younger, more liberal-minded arrivals in the 1970s.

The Richmond council was finally kicked out in the early ‘80s, before the internet ensured we have lots of accounts to study. A Janet Leigh story in The Bulletin in 1982 – ‘Old Richmond goes, trounced by the trendies’ – tells the tale pretty well. Richmond, according to Alastair Nicholson QC, who conducted the state government inquiry into the council, was ‘akin to a totalitarian state.’ The final four times mayor, Geoff O’Connell, was guilty of ‘gross abuse of power, electoral malpractice, fraud, administrative incompetence and malpractice.’ It’s no wonder that closing chapter in Richmond Labor Party politics was burying ‘the remains of the old ALP Right-wing Catholic machine.’

The Labor Party division made it easy for the Liberal Party to control Victorian politics for many years. It’s notable that during Henry Bolte’s extreme right wing rule from 1955 to 1972 the Melbourne tram system was methodically run down, Bolte was in the pocket of the car manufacturers and the RACV (Royal Automobile Club of Victoria) and had no time for public transport. Not a single new tram was added to the city tram fleet during the Bolte years. As soon as he was gone new trams were ordered.