You can trash a reputation in a flash, it takes a long time to rebuild it. Robert Mugabe pretty much managed to destroy Zimbabwe’s economy and in the process chased away most of the country’s tourists. He did such a comprehensive job of wrecking things nobody has noticed that in the last couple of years things have turned around. In fact things started to get better as soon as Morgan Tsvangirai came in as half (the smaller half) of the GNU – Government of National Unity – with perennial vote-fixer Mugabe. The local joke is it’s more like the famously ungainly wildebeest than a gnu, but no question things have got much better. So Mr Mugabe can’t claim credit for the improvement – although he will certainly try to. 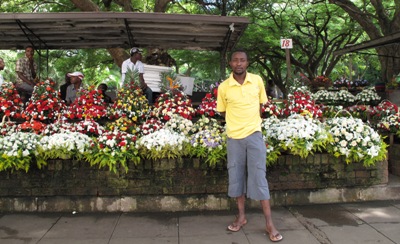 ▲ My Zimbabwean surprise kicked off as soon as I arrived at Harare airport on an Ethiopian Airlines flight from London via Addis Ababa. Where was the chaos? Where were the desperate taxi drivers? Where were the car-swallowing potholes in the road? In fact this looked much better than a lot of African cities I’ve been to. In comparison Harare was neat and orderly, not only did traffic lights work but cars stopped at them. The shops were crowded, the shelves were full. There were even flowers on sales beside this park in central Harare. Not at all what media horror stories would have you believe.

During the next two weeks I drove down to Bulawayo from where I made forays out to the Khami Ruins and into the Matobo National Park.

▲ Want the most impressive African ruins south of the Sahara? Then head for Zimbabwe where the ancient city of Great Zimbabwe gave its name to the country. They’re the best known, but the country has other ruins worth searching out like the Khami Ruins just outside Bulawayo. The western side of the Hill Complex has recently been restored with French assistance.

▲ South of Bulawayo the Matobo National Park has amazing rock formations and the grave of Cecil Rhodes, who for a spell gave his name to the country, Zimbabwe was known as South Rhodesia in the colonial era. There’s been considerable reassessment of Rhodes over the years although even when he was alive he had many question marks attached to his activities. There’s no question about the view from the hilltop where he’s buried, it’s known as World’s View.

▲ The park is also noted for its bushmen cave paintings, like these at White Rhino Cave. 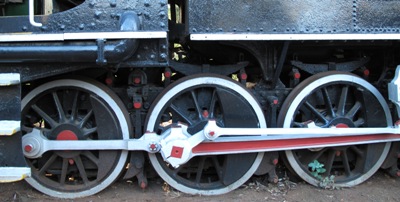 ▲ Trainspotters would be blissfully happy at Bulawayo’s railway museum, I don’t think I’ve ever seen such a big collection of steam locomotives and other railway paraphernalia. 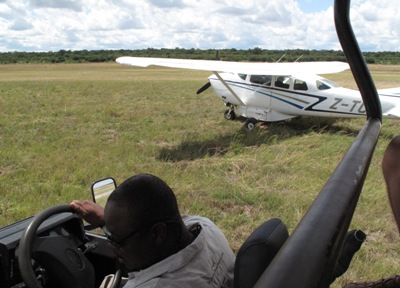 ▲ From Bulawayo Craig Van Zyl of Classic African Safaris took me from National Park to safari camp to game lodge with stops in the Hwange, Chizarira and Matusadona National Parks. Here we are heading off to Davison’s Camp after landing at an airstrip in Hwange National Park. Some of our wildlife encounters will follow in my next blog. 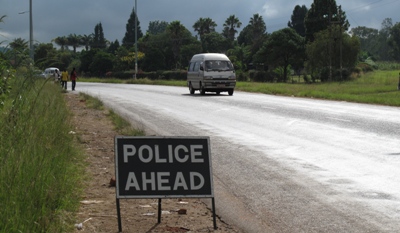 ▲ Back in Harare I rented another car and headed east to Mutare and on to the Bvumba Mountains near the border with Mozambique. On the way I got zapped in a radar speed trap, doing 87kph in an 80kph zone. It cost me US$10, but you couldn’t ask for a nicer bunch of speed cops, they even let me play with the radar machine and check other cars while they were writing out my ‘Admission of Guilt’ form. It’s pay on the spot and you get a receipt, so it’s straight up and down, no bribery or funny business involved.

▲ Get a hair do in Mutare? The town is the locale for The Last Resort, which I’ve just read and reviewed. Of course everything wasn’t bright and wonderful in 2011 Zimbabwe, there were places I’d been to on previous visits in 1989 and 1997 which had been taken over and, as a result, were closed, others just hanging on with very few visitors and often the good places still going were the survivors when many other safari camps and lodges had laid off their employees and closed down the tent flaps. There are still very few visitors, but perhaps it’s the time to start going back. I had a great time.