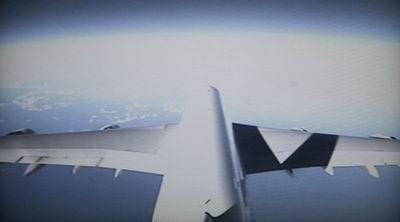 ▲ Crossing the Pacific in a Qantas A380, view from the tail-mounted Skycam

How long before the Qantas fleet of A380 aircraft gets back into the air? They’ve been grounded since QF32 suffered an ‘uncontained engine failure’ on take-off from Singapore’s Changi Airport on 4 November.

More interestingly how long before VH-OQA, the damaged A380, is back in the air? Since bits of Rolls-Royce Trent engine shot through the bottom of the wing and out the top it isn’t just a case of slinging a new engine under the wing. It’s even been suggested that the damage is irreparable, but the likely course is that there will be a patch up job on the wing in Singapore and the aircraft will be ferried back to the Airbus factory in France for major repairs. Click here for a good analysis, with lots of pictures, of the damage.

So how long did other major aircraft repairs take? On 20 March 2009 Emirates flight EK 407, an Airbus A340 registration A6-ERG, tangled with the end of the runway at Melbourne’s Tullamarine Airport. The crew had entered the aircraft weight into its computer as 262 tonnes when it was actually 362 tonnes. End result was a ‘tail strike’ on the runway and taking out some of the landing lights beyond the runway. A close thing.

The aircraft sat in Melbourne for 92 days, then flew back to France, unpressurised, at 10,000 feet. Following a major repair job it re-entered service on 1 December 2009. That’s 257 days after the accident.

Qantas had an ‘incident’ back on 22 September 1999 when 747-400 VH-OJH ran off the end of the runway at Bangkok’s old Don Muang Airport. It ploughed into the golf course beyond the end of the runway suffering major damage although fortunately not to the passengers. For many months arriving or departing Bangkok you could see the 747 in a hangar. There were estimates that repairs cost $100 to $120 million, approaching the value of the 9-year-old aircraft, and rumours that Qantas only repaired it because they did not want to admit to suffering a ‘hull loss.’

Eventually it was flown off to China to be repainted and re-entered service on 6 April 2000, 191 days after the event. Reportedly it was nicknamed the ‘golf buggy’ and Don Muang golf players refer to the ‘Qantas approach’ to one of the holes.