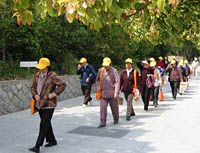 I’ve had quite enough of Putuoshan after a few more hours wandering. Too many temples (some of which feel like they’ve been built just to fill in time for tourists) and far too many crowds of tourists.

The white-cap brigade marches down one side of the road, the red-cap group up the other, while the blue-cap guide tries to drown out both of the other guides with his loudhailer. Plus there’s a hundred restaurants ready to put on seafood feasts and very few offering anything else. 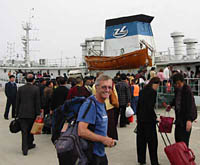 Part of the reason I’ve come here, however, is purely to continue to Shanghai. The idea of arriving at the Bund by sea has a definite romantic appeal and the ferry service from Putuoshan is one of the few ways you can do it.

The fast day-ferries dock a couple of hours’ bus ride out of Shanghai; if you want to sail right into Shanghai you have to take the slow overnight ferry, and that’s what I decide to do. 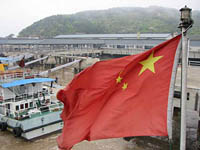 The good ship Jin Ping departs right on time. This is no luxury cruiser, although my bunk in a four-berth outside cabin is nearly as spiffy as it gets. I hate to think what it would be like sharing a windowless eight-bed inside dorm with seven typical Chinese chain-smokers. There’s no safety drill and not a life jacket in sight, so a safe passage please. 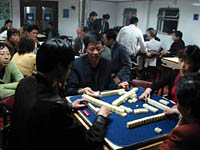 After a surprisingly tasty meal with Steve and Christine, Aussies from Brisbane and the only other Westerners on board, the dining room area is taken over by mah jong players, so I head off for an early night. My cabin mates (husband, wife and mother/mother-in-law) are already asleep. Tomorrow is the end of this trip: all the way from Singapore to Shanghai, without a single flight.