We started 2009 in a very luxurious place (the Southern Ocean Lodge) close to a couple of spectacularly rugged national parks on South Australia’s Kangaroo Island. And we’ve continued the pattern with a stay at the equally luxurious Pretty Beach House, where we could walk out of our room and straight into the Bouddi National Park.

The grounds of Pretty Beach House

Pretty Beach House overlooks, as the name indicates, the tranquil little coastal town of Pretty Beach. It’s an hour and half’s drive north of Sydney, although on a clear day you see central Sydney skyscrapers from some of the park’s lookouts, the road winds a bit.

A disclaimer, Pretty Beach House is owned by John Singleton, a former partner of Maureen and mine in Lonely Planet. John departed when BBC-Worldwide arrived, but he’s still a friend. At Pretty Beach he took an earlier guest house (the Headlands Resort) and turned it into this stylish little hideaway with just three rooms scattered across a hillside amongst the red trunks of angophoras, also known as Sydney red gums, with their bizarrely twisting and winding branches. 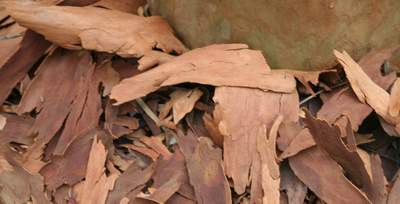 At this time of year angophoras shed all their bark, which piles up very artistically around the trunk of these beautiful trees. 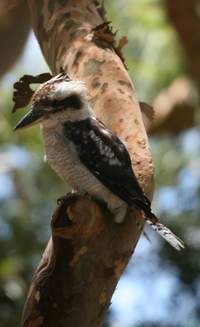 This resident – and very self assured – kookaburra will take food right from your fingers. Or straight off your plate while you’re eating if you don’t cooperate.

What to do at Pretty Beach House? Laze around, read books, eat (and drink) very well and then work some of that lazing, eating and drinking off by walks in Bouddi National Park. There are plenty of fine walking trails winding into the park or along the coastline, sometimes dipping down to beautiful and often near deserted beaches.

Descending the walking track to Maitland Bay in Bouddi National Park. From there you can walk along a coastal track to Putty Beach (yes Putty, not Pretty) and on to Killcare.