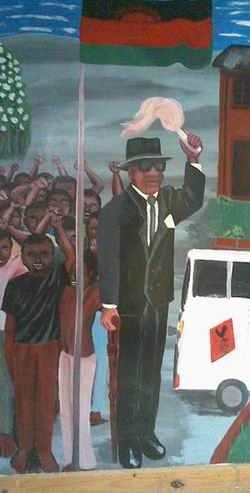 Cycling through Malawi on the Tour d’Afrique bicycle ride in March I kept on bumping in to a gentleman who took a serious dislike to Lonely Planet in the early 1980s – Dr Hastings Banda, Malawi’s ‘President for Life.’ Early editions of our Africa guide (and our pioneering Africa author Geoff Crowther) were banned in Malawi because of what we said about Dr Banda.

A Hastings Banda mural in the Karongo Museum, the homburg hat and the fly whisk were his ever present symbols

If you turned up at the Malawi border with our Africa guide it was likely to be confiscated on the spot. Lonely Planet travellers in Africa at that time went to great lengths to preserve their guidebooks.

A few years back somebody showed me their doctored History of Rhodesia (or something like that), a school textbook which mysteriously metamorphosed into Africa on a Shoestring after a few pages. 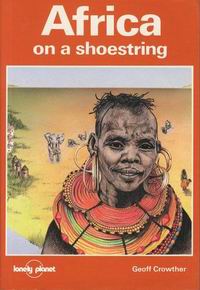 an early edition of Africa on a Shoestring by Geoff Crowther►

A week before I arrived in Malawi on my bicycle I’d bumped into Scott Wayne, a former Lonely Planet author, on the island of Zanzibar. Scott recalled how he turned up at the Malawi border 20 years back and they wanted to confiscate his book.

‘Can’t you just tear the Malawi section out?’ he offered.

‘Well how about me tearing everything else out and you confiscate the cover and the Malawi section?’ That was OK.

Banda was a typical African ruler, he kicked off with high ideals and soon decided that looking after himself was just as important as looking after his people and that, furthermore, nobody could do as good a job as he did. Unhappily they’re still present in abundance.

▲ The Banda Mausoleum in Lilongwe, the capital of Malawi. He was almost 100 years old when he died in 1997 – although in fact his birthdate is uncertain.

▲ I couldn’t get away from Dr Banda in Malawi, we stayed in the Kasunga Inn en route to Lilongwe and sure enough the ‘President for Life’ had been there too.

Click here for more on my first stage of the Tour d’Afrique and here for my second stage.