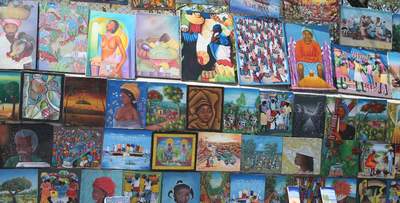 Art for sale on the street in Pétionville

Remember Haiti? The half-a-Caribbean island where the first ever slave revolt ended with the defeat of the French colonialists? Despite the black leader of the slaves, the wonderfully named Toussaint Louverture, being double crossed by the French and dying in a French jail? After that glorious start everything went wrong and Haiti has stumbled from one disastrous leader to another, including the equally wonderfully named Papa Doc Duvalier.

Statue of Toussaint Louverture in the Champs de Mars square

In 2004 things hit rock bottom and a multi-national UN force waded in to restore law and order. It seems to have worked, things are much quieter and safer and despite assorted ‘don’t visit’ government advisories in October we’ll once again have a Lonely Planet guide to Haiti. Our Dominican Republic & Haiti guide has been Dominican Republic only for the last two editions.

Haiti is famous for its exuberant naïve art and although there’s plenty to see in the art galleries in Pétionville, the swish suburb of the capital Port-au-Prince, there’s also lots for sale right on the street. Plus you’ll see art passing by you all the time, in the form of the extravagantly painted buses known as tap taps. In Port-au-Prince the Sainte Trinité Episcopalian Cathedral features murals by some of the big names in Haitian art.

You see the art but you’ll also hear the music everywhere you go, Port-au-Prince could easily compete with nearby Havana for street music. One of the city’s prime music performances takes place every Thursday night at the Oloffson Hotel, it featured as the Trianon in Graham Greene’s classic Haiti novel The Comedians. Richard A Morse, the hotel’s owner, performs with his racines band RAM, the action kicking off around midnight. Racines means ‘roots music,’ music that harks back to Haiti’s African origins although RAM’s take on the theme is also known as ‘voodoo jazz.’ Well, more correctly vodou.

The only trouble is, how do I get home afterwards (I stayed at the Oloffson when I first arrived but couldn’t get a room on Thursday night)? Even our new Haiti edition will warn that you shouldn’t venture out on the streets after dark. So it’s the early hours, there’s nobody out on the streets and no transport to be found. Eventually I got some guys to give me a ride to Champs de Mars, the main square, which I thought might have a little more activity, and from there I managed to get a moto-taxi, a motorcycle rider, to take me back to Pétionville for probably the most extravagant moto-taxi fare ever paid.