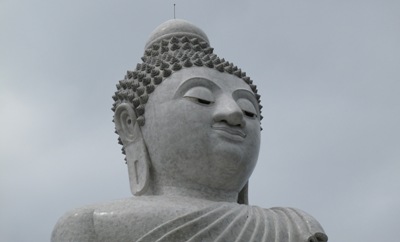 A pre-Christmas week in Phuket included a visit to this recent acquisition, the 45-metre-high seated Big Buddha figure which seems to be visible from all over the southern end of the island. A long winding road twists and turns up to the hilltop location where the figure is surprisingly well finished in white marble tiles. It’s still a project in progress and it will probably be a few years before the surrounding area is finished. 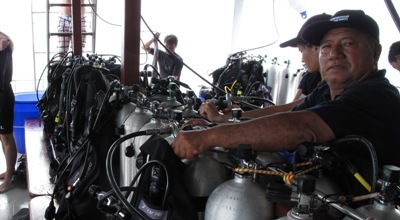 I also spent a couple of days scuba diving – at Racha Yai and Racha Noi Islands, Shark Point, Bida Nok (the rocky islet just south of Ko Phi Phi) and Viking Cave at Phi Phi Ley. At Shark Point I only saw one leopard shark, you could hardly ask for a more unassuming shark than these babies, but sharks aren’t the site’s main attraction. If, like me, you like anemone fish then this is the place to go, there are lots of them and lots of varieties.

▲ A dive boat off Viking Cave on Phi Phi Ley

In 1974 Maureen and I chartered a fishing boat and went out to Ko Phi Phi to write it up for the first APA Insight Thailand Guide. As a result it also appeared in the first edition of South-East Asia on a Shoestring, but at the time there was nothing here at all apart from a small fishing village. I wrote that you could probably arrange to stay with the villagers and wait for another fishing boat going back to the mainland. Tourist-wise I guess we can claim to have ‘discovered’ Ko Phi Phi. We looked around the island, Phi Phi Don, and went over to Phi Phi Ley to see the amazing birds nest collecting going on in the giant cave. Plus we saw the wall paintings which give the cave its name, although they’re Chinese junks not Viking boats! All the photographs I took of Ko Phi Phi, the caves, the birds nest collectors, the wall paintings, were stolen in Penang at the end of the year.

In 1974 in Phuket you could stay at one of the hotels in Phuket Town. Out at the beaches? Well there was an open air restaurant at Patong Beach where you could unroll your sleeping bag on the floor! That was it, nothing else. How times change.