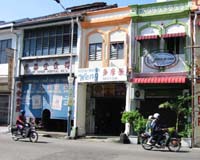 I start the day with a morning stroll of Georgetown’s remarkably unchanged streets. I’ve been coming here since 1974 and much of it has not altered at all. Penang Island has become a centre for computer equipment manufacturing, but that hasn’t altered the shophouses of Leboh Chulia one little bit. In fact, if you want a genuine overseas-Chinese city this is the best there is – far more authentic than Hong Kong or Singapore. 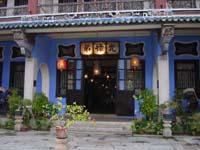 At 11am I join the tour of the Cheong Fatt Tze Mansion. It’s quite a story: the penniless, uneducated 16-year-old Chinese lad heads off to Southeast Asia to seek his fortune, marries the daughter of the boss at his first real job in Jakarta and then proceeds to make a major fortune, building houses all over the region and marrying seven or eight times along the way.

‘Well, if you were wealthy you were expected to have lots of wives,’ our energetic, knowledgeable and very entertaining guide explains. ‘And as he got older, the wives got younger.’

Unfortunately he did not pass his wealth on to his heirs. Instead he left it all to a trust with instructions that it could not be disposed of until his last child died. Cheong Fatt Tze was 76 years old when he died in 1916 and he was 74 when his last child was born. That son did not die until 1989, and by then the house was occupied by dozens of squatters and was falling apart. It took years of careful restoration to bring the house back to its present condition. 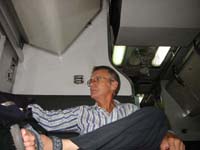 Back on the mainland the train departs right on time and it’s pleasantly uncrowded. It’s clearly a Thai train as well: the air-con soon sends me digging through my bag for a sweater. Bus or train travel in Thailand always feels like you’re in a meat freezer. I celebrate crossing the border with a cold Singha beer.