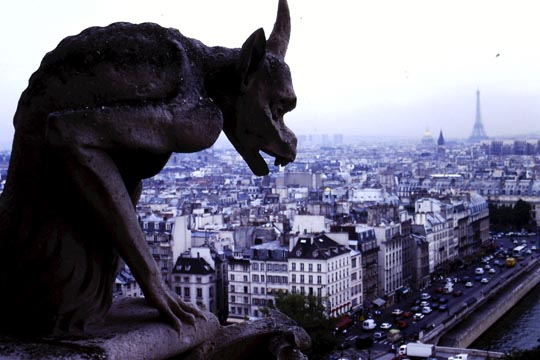 In 1996 I lived in Paris for the whole year and most days walked from our apartment on Rue Saint-Paul in the Marais across the Seine River to the Lonely Planet office near Place de la Contrescarpe. Today Google maps tells me my twice daily stroll was 1.6km in each direction, we didn’t have Google Maps in the mid-90s. 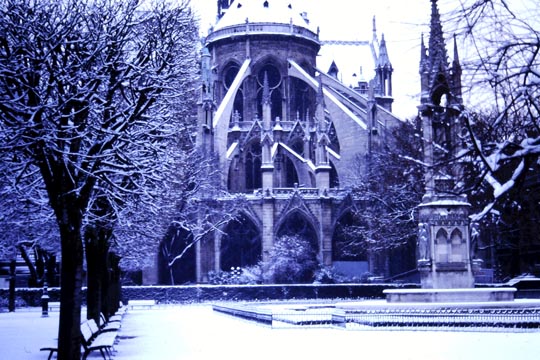 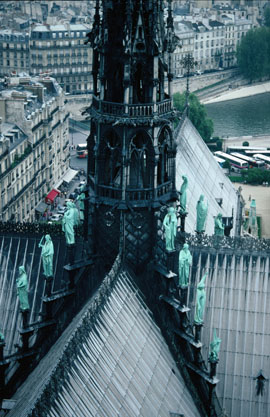 ▲ I even made the walk in snow a few times, here’s the east end of Notre Dame and La Fontaine de la Vierge in the snow.

◄ I explored the cathedral a few times during the year, on this occasion looking back at the spire from the towers. You can see the statues – there are 16 of them – below the spire which were removed for restoration just days before the fire.

Looking back at my diary for that year there are several accounts of that delightful walk. On 8 July 1996: It’s a great walk from our apartment to the office. I leave the Marais and cross the Seine via the Île St Louis, either in the middle passing the restaurants along Rue des Deux Ponts and then the Tour d’Argent, one of the most famous (and expensive) restaurants in Paris, or at the next bridge upstream, passing by the interesting Institut du Monde Arab building.

The two routes meet a block south and climb uphill along Rue du Cardinal Lemoine, past the metro stop to our office, hidden away down an alley at 71 bis. James Joyce used to live at the front, at 71, and a stone’s throw further south, just off the picturesque Place de la Contrescarpe, a sign proclaims a Hemingway residence. Sometimes I cross the Seine further west and walk by Notre Dame, pinching myself that I get to do this everyday this year. At the entrance to 71 bis I push my magnetic key card into the slot and then enter the couloir du mort or ‘death row’, a bizarre mirrored corridor which goes under the apartment building to pop up in the office part of the complex. It’s bright, modern, airy and very French.

Or a week later on 15 July: Wandering to work via a different route past Notre Dame I come up behind one of the EOL model shops on Boulevard St-Germain. The front is all amazingly intricate little model cars and airplanes, the back, which I’d not seen before, has all sorts of equally amazing little fantasy figures, warriors and soldiery. There are fairytale figures of five cm high half-naked witches walking pet dragons and neat little boxes of Viking barbarians labeled: ‘rape & pillage series’. Once I saw sets of little figures to inhabit an authentic model train set red light district, complete with prostitutes swinging their handbags and pimps leaning ominously against lamp posts.