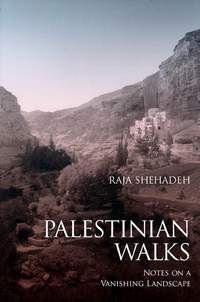 Perfect (if depressing) timing that I should be reading Palestinian Walks just as Israel launches all out war on Gaza. Although can you call what’s going on a war? When one side is armed with everything the US arms merchants can churn out while the other depends on whatever can be smuggled in through tunnels under the border from Egypt?

Raja Shehadeh’s walks move through time as well as along the wadis (dried up riverbeds) and past the ruined qasr (literally a ‘castle’ although really more like a barn) of the West Bank. It’s a sad story, his walks increasingly proscribed by Israeli settlements and the connecting roads which not only cut off village from school, farm from field, but are also off limits to Palestinians. Not to mention that ugly wall, at 8metres high it’s twice the size of the one that divided Berlin.

It isn’t only the Israelis ruining the country, Shehadeh admits his fellow countrymen can be appalling litterbugs, trigger happy Palestinian gunmen can be just as much a threat as the gun-toting settlers and on one walk he frets that angry Bedouins may not be able to tell Arabs from Jews.

Despite a final encounter with a pot-smoking and nature-loving Israeli settler the conclusions are not hopeful. The settlements are still advancing when they should be retreating, the laws are tilted more and more heavily against Palestinians and ex-US-president Jimmy Carter’s use of the word ‘apartheid’ sounds unhappily accurate. In 12 months, five years or 10 years from now I’d be willing to bet the current Gaza destruction will be looked back upon as yet another very foolish decision.