The 7.8 on the Richter Scale earthquake which hit north-eastern Pakistan on 8 October last year killed 73,000 people, damaged or destroyed 80% of the buildings in large parts of the zone and left three million people homeless. The Lonely Planet foundation has been a supporter of Australian Aid International in their work iafter the earthquake plus a couple of LPers from our Melbourne office have volunteered to go up to Kashmir to work with AAI. Maureen and I are in Pakistan to look at what they’ve been doing… With a couple of chai stops it took nine hours to drive from Islamabad via Bagh, today one of the epicentres for relief efforts, and up over the Lasdanna Pass to Kahuta. Any Corolla which rolled off Toyota’s assembly line between 1975 and 1979 and is still running seems to have ended up in this area of Pakistan. We encountered several of them slipping and sliding, snowchainless, as we approached the summit of the pass in a snowstorm. Disappointingly my GPS indicated that for all that driving in a straight line we’d come just 95 km. 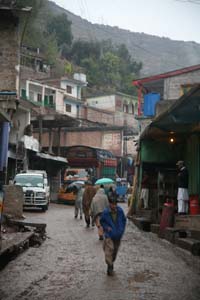 The Australian (and one American) aid workers and their Pakistan support staff from Australian Aid International have shacked up in a house near the centre of  Kahuta (aka ‘Forward Kahuta’) just a few km from the ‘Line of Control’ which divides the Pakistan slice of Kashmir from the Indian version. This is the first time since Partition, which separated India and Pakistan back in 1948, that foreigners have been allowed into this sensitive border region. They’re still treated with curiosity, in particular the Cubans who set up a number of field hospitals. Castro had offered to send them to New Orleans post-Katrina, Bush said ‘no thanks’ and as a result they were ready to go when the quake hit.

We visited schools, health centres and damaged homes with the AAI crew, but it’s clear the recovery work has moved on to stage three.

AAI, which arrived on the scene only days after the tremblor, was heavily involved in stage one: pulling survivors out of wrecked buildings and treating the injured. 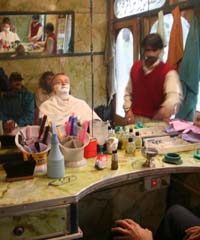 Stage two involved reopening roads and repairing bridges and finding temporary shelter for the homeless. There were lots of Pakistan army in the region, courtesy of the ongoing border tension with India, and by all reports they made repairs with commendable speed. Temporary shelter came next, helped along by a surprisingly mild winter. AAI distributed more than a thousand IRAWS (Improvised Rapid All Weather Shelters), simple constructions of corrugated iron and sandbags designed by an Islamabad architect. Tent cities also popped up right across the region and today most children are attending school in tent classrooms. School buildings were particularly prone to collapse in the earthquake and children constituted 50% of the deaths. 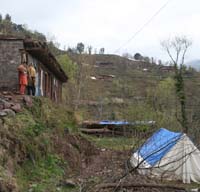 Now it’s stage three, rebuilding, and unfortunately bureaucracy is slowing down this phase. The Earthquake Reconstruction & Rehabilitation Authority (ERRA) stipulates that houses must be rebuilt to earthquake proof standards to qualify for the maximum 150,000 rupees (about US$2,600) grant and establishing the standards and dispensing the money looks like taking a long time. What Pakistan could do with right now is a bunch of Californian building engineers, experts on earthquake proof construction.

11-12 March – Buddhas, Batters & Booze
Our first couple of days were spent in and around Islamabad. 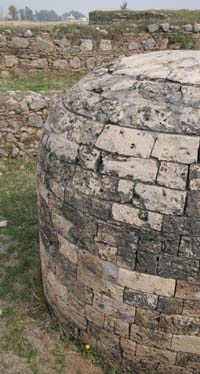 he Buddhas
With some of the AAI people we head to Taxila, the ancient Buddhist site close to the city. It’s a curious blend of Greece (thanks to Alexander the Great’s visit to the region 2300 years ago) and Buddhism in the heart of one of the world’s biggest Muslim countries. The Taxila museum is full of superb Gandharan (the ancient name for this area) Buddhist art, nearby are the traces of the stupa-studded city of Sirkap and remains of the classic Greek Temple of Jandial while the monastery of Mohra Moradu has the ruins of an age-old stupa with stuccoed Buddha images. 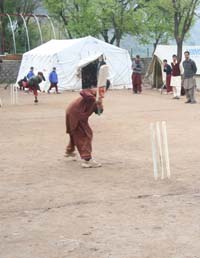 Batters
That night while we’re having dinner the TV is tuned to the South Africans slugging it out in the nail-biting final minutes of a superb cricket match against Australia. The game goes right down to the line with everybody in the restaurant – waiters and kitchen crew included – glued to the screen. South Africa wins by the narrowest of margins and everybody is delighted – not by Australia’s defeat but by such a wonderful game. The Pakistanis love cricket.

And Booze
‘Getting beer is not difficult,’ our hosts report at a dinner we went to the previous night. Indeed Pakistan’s Murree Beer, brewed in Islamabad’s twin city of Rawalpindi, is not bad although you’re supposed to be a non-Muslim to enjoy it. ‘Other drinks are more difficult,’ they continue. ‘We get Scotch from the embassies. The North Koreans are the number one supplier.’ Once upon a time visitors could get a certificate confirming they were alcoholics and needed booze for their survival, today our hotel supplies a temporary membership card to their basement bar. Cash only, you can’t charge it to your room.

Tomorrow we head up to the earthquake zone. Already we’re confirming what most visitors find out when they visit Pakistan – forget the media reports, the people are friendly and it’s a terrific country to visit.