I flew on the non-stop Qantas flight from Australia to England, Perth. It took 16 hours 47 minutes, slightly faster than scheduled and although it’s not the longest non-stop flight it’s certainly right up there. Qatar’s Doha-Auckland is slightly longer and Singapore Airlines’ Singapore-New York flight is closer to 19 hours. Qantas report that Sydney or Melbourne to London or New York will be coming soon. 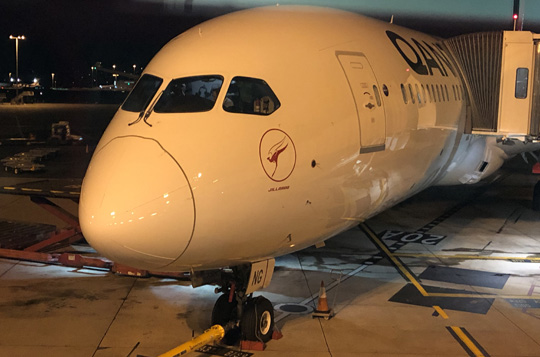 Is it faster than flying via Singapore, Dubai or one of the other popular mid-points between Oz and the UK? Well certainly if you’re starting from Perth, but from the Australian East Coast – Sydney or Melbourne – it’s the same total distance or time, you’re just spending transit time in Australia rather than Asia or the Middle East.

So you get to Perth, depart soon after dark, they give you dinner – which I stretched out as far as it (and a couple of glasses of wine) would go – and there’s still 15 hours of night. Westbound you’re chasing the night, it has to be one of the longest on record, dawn only came up just before we arrived in London at 430am.

I slept a lot, updated emails a lot, read a lot, didn’t watch any movies and looked out the window particularly as we approached the Arabian Peninsula, crossed the Gulf and tracked north over Iran. Is it popular? Well despite supposedly charging premium prices Qantas is reporting very good load factors, I’d agree, I walked around the aircraft soon after we departed Perth and there couldn’t have been more than a handful of empty seats. And perhaps they were in a loo? Environmentally? Well I strongly suspect it’s not a good idea, the sweet spot is probably more like six or seven hours rather than 17.