Outside Magazine’s December 2010 issue has an article – If It’s Tuesday, It Must Be the Taliban – on travelling around Afghanistan with Englishman Geoff Hann’s Hinterland Travel group. Geoff has been running tours through unlikely places for many years and recently – as the danger level has dropped from 11 down to something still rather high, but much more reasonable, further into Iraq. 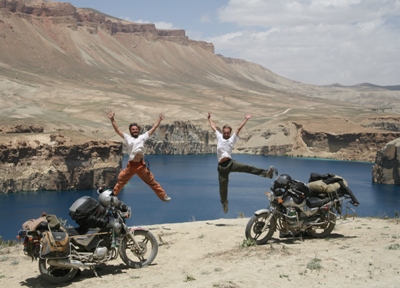 ▲ I wasn’t the only tourist in Afghanistan in 2006, I met these two French motorcyclists at the Band-i-Amir lakes. 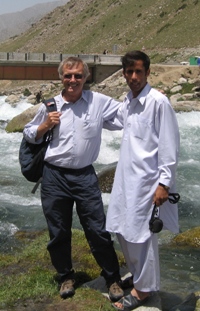 The article’s travels pretty much duplicate my own travels through Afghanistan in 2006 – Kabul, Bamiyan, the Minaret of Jam, Herat, Mazar-i-Sharif – I wrote about that trip in my book Bad Lands. But have things got much worse from 2006 to 2010? Or was it just easier travelling by myself  (well with an Afghan fixer and for a spell with a driver as well) than with a group? I suspect the reality was Outside making the whole experience seem rather more nervous and edgy than it really was.

◄ On the road to Mazar-i-Sharif with Mubin Jamshady, my terrific Afghan guide