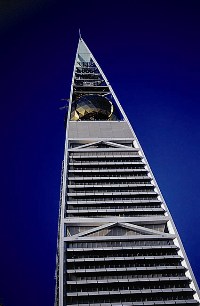 After all the talk about Osama bin Laden hiding out in a cave in the unpoliced badlands along the Pakistan-Afghanistan border region he turns up in laid back Abbottabad just 100km north of the Pakistan capital Islamabad.

Abbottabad is covered in our Pakistan & the Karokoram guidebook and on the lonelyplanet.com website. It’s on the Karakoram Highway running from Islamabad to Kashgar in China and it’s a steep 500metre climb on the last 15km to the town so it’ll be nicely cooler than down on the plains.

Our coverage notes that Abbottabad features ‘shady gardens, church bells and wide streets’ as well as a ‘vibrant bazaar.’ There’s a ‘sizeable Christian minority and three active churches.’ Our guide goes on to recommend no less than eight hotels and six restaurants, perhaps Osama used it to choose where to eat if he went out for an evening stroll in his handy hideaway? 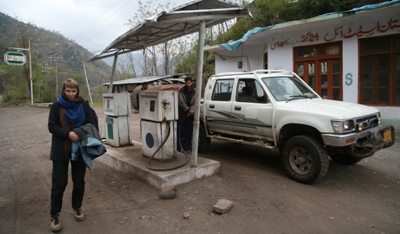 ▲ Maureen on the road from Islamabad to Forward Kahuta.

Maureen and I went to Pakistan in 2006 to visit an Australian aid project in the aftermath of the late-2005 earthquake. We travelled north from Islamabad to Forward Kahuta, close to the ‘line of control’ between Pakistan and India in Kashmir. You can get directions for the drive from Islamabad up to Osama’s place on Google Maps (108km, 1 hour 43 minutes) – or to Forward Kahuta.

I initially thought Osama’s final hideaway was close to the centre of Abbottabad, we could have pinpointed it on our map. Google Earth currently show multiple locations, but the real one seems to be at 34°10’09.40N, 73° 14’33.30E