My Solomon Islands and Papua New Guinea trip took me via a back door entry into PNG through the Shortlands Islands. En route I had a look at the tragic history of Balalae Island and then tracked down the wreckage of Admiral Yamamoto’s WW II crash. On Bougainville I made a trip up to the huge open cut Panguna mine site, the cause of the civil war which wracked Bougainville through the 1990s.

Next stop was Buka, which meant an early departure. The PMVs – Public Motor Vehicles – up the coast from Arawa to Buka depart at 3 am! Or at least they’re supposed to, I was up ready for mine and it didn’t turn up until 430. 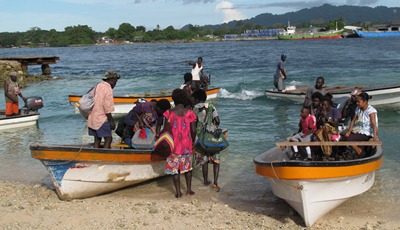 ▲ The narrow Buka Passage separates Kokopau from Buka and water taxis shuttle back and forth across the passage all day for a flat fare of K2 (50c US) per person.  The fast flowing Buka Passage, the water often flows through the passage at 6 knots. 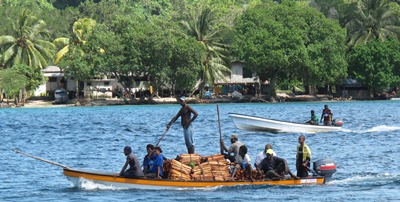 ▲ I stayed at Destiny Haus, a new place right on the water’s edge and there was always activity on the Passage to watch. During the long civil war most of Bougainvlle was closed off by the fighting and Buka became the de facto capital of the province. Part of the peace agreement was a higher level of self government for what is now the Autonomous Region of Bougainville with its own parliament building in Buka. In 2014 there will be a referendum on independence for the region. 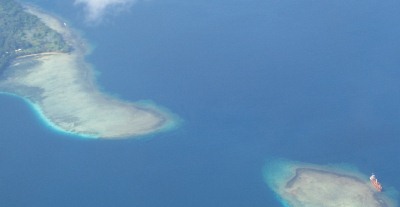 ▲ From Buka I flew to Kokopo/Rabaul in New Britain. As we climbed over the coast I looked down on this reef and spotted a cargo ship, stuck high and dry.