My lengthy stay in London concluded with a visit to the Gauguin exhibition at the Tate Modern. I’ve made lots of visits to French Polynesia, including working on a couple of editions of our Tahiti & French Polynesia guidebook. But for some reason I’ve never been to the Marquesas, the remote islands where Gauguin’s life ended. I’ve also seen lots of Gauguin works in lots of galleries over the years, the amazing collection at the Pushkin Museum of Fine Arts were a real surprise. The Tate’s show features works from the Pushkin, but also from a roll call of other galleries and museums around the world. It’s on until 16 January 2011, you might need to book tickets before you turn up, the show is very popular.

The British Library’s map exhibit was one of my favourite London exhibits this summer. It’s over now, but there’s plenty of ongoing exhibits at the British Library which is handily close to St Pancras station, where the Eurostar trains for Paris and Brussels run. 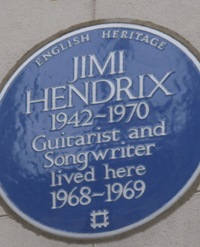 For a couple of years before his death in 1969 Jimi Hendrix lived in a flat at 23 Brook St in Mayfair. Two centuries earlier, and for much longer, for 36 years until his death in 1759, the composer George Frideric Handel lived right next door at number 25. Today the Hendrix flat is used as office space by the Handel House Museum, but through 7 November they’ve moved their office out and put on a Hendrix in Britain exhibit. 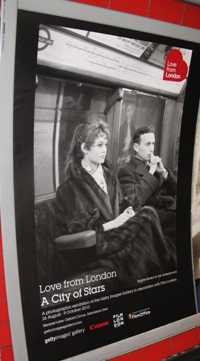 Then there was Love from London – a City of Stars, a great photo exhibit at the Getty Image Library of black & white images of assorted stars (mainly the movie type) visiting London in the ‘50s and ‘60s. This ad for the show on the Tube shows Brigitte Bardot, on the Tube. 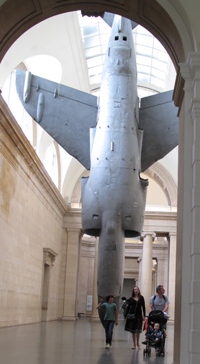 Or an aircraft I saw crashing into the Tate (not the Tate Modern) on another visit. More on aircraft soon when Maureen and I set out on a long flight back to Australia.