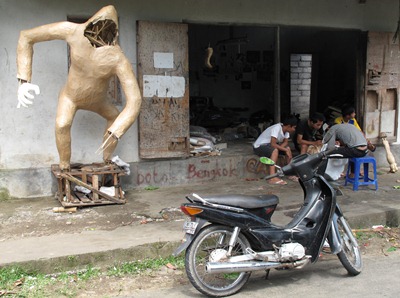 Everywhere I went in Bali giant ogoh-ogoh figures were under construction. Not only everywhere, but everytime – when I set out from Ubud at midnight to drive to the foot of Mt Agung to climb that iconic volcano ogoh-ogoh constructors were still hard at work.

The figures are of mythological (and modern) monsters and demons and they’ll meet their end on Thursday 22 March when all over the island the ogoh-ogoh figures are carried around in the Ngrupuk parade before being set on fire in a finale of noise, drumbeats, shouting, confusion and fireworks. The festivities – accompanied by loud shouts of ‘megedi, megedi’ – ‘get out, get out’ – are a purification ceremony, designed to drive demons and bad spirits out and keep things under control for another year.

Any demons who don’t get the message and depart on Thursday will get a surprise on Friday 23 March which is Nyepi, the ‘Day of Silence.’ Bali completely shuts down. Surviving demons will probably decide the island has been abandoned, so the theory goes. They’ll be bored into submission and leave Bali alone.

Nyepi is taken very seriously, from sunrise on Friday nobody will be allowed to leave their homes and that includes tourists who must stay inside their hotels. There will be no vehicles on the roads and there won’t be any flights arriving or departing Bali either. Denpasar airport is completely closed. In many places the electricity will be shut down to ensure there’s no noise from TV or radios.