With a group of friends we travelled Norwegian fjords around Bergen and Stavenger – I posted Part 1 a couple of days ago.

▲ Now I’m on to Part 2 including the old hydro power station at Flørli on Lysefjord. The building houses one remaining power turbine and station history displays along with a café. It’s a good place to escape from the rain.

▲ From beside the station the water pipes and a cable railway run steeply up the side of the fjord. Beside the line a wooden stairway counts 4444 steps up to the top. Only four of our group climb up in the rain and we don’t walk all of them, just 700 to the point where a walking path cuts through the forest to come out at the top of the Flørli village

▲ As we cruised by Bergen there was lots of evidence of Norway’s North Sea oil production, Stavanger is, however, the oil city and features the oil museum.

▲ Near Stavanger Sør-Hidle Island and the Flor & Fjære gardens was a major surprise. It’s unbelievably beautiful and amazingly colourful with over 40,000 flowers, all of them grown freshly every season. It kicked off when Aasmund Bryn bought the end of the island to build a weekender in the ‘60s. As Norwegians do. His son Olav Bryn took it over, expanded it and turned it into a major tourist attraction. Every year during the summer season 30,000+ visitors come on a ferry, garden tour and lunch or dinner package. 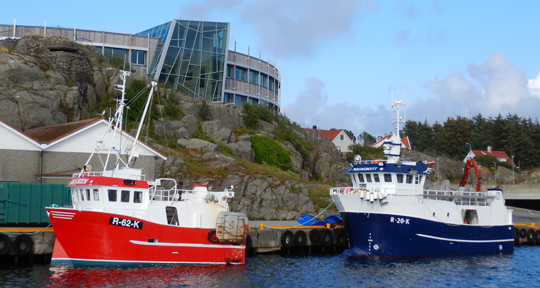 ▲ Approaching the little port of Skundeneshavn on the island of Karmøy these two toy-like boats were moored on the waterfront.

▲ Skundeneshavn is impossibly picturesque, well a lot of Norway is impossibly picturesque, but the town also features the wonderful Museum in Maelandgården which has an enormous volume of ‘old stuff’ on display in room after room after room. Apart from the house rooms there are also assorted shops and workshops – hairdresser, laundry, shoemaker, cooper (barrel maker), metalwork, dentist – it just goes on and on and then there are boat houses with a large number of small ships, models, fishing nets, equipment. An altogether fascinating museum. 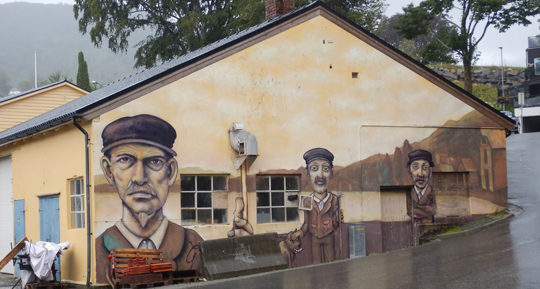 ▲ The fjord-side village of Rosendal was attractive as well. It also features the stone Kvinnherad Church from 1255 and the Baroniet Rosendal, the house of the only barony in Norway, royal family apart there wasn’t much aristocracy in Norway and in fact it died out (no surviving children) in 1927 when the house was handed on to Oslo University. The modern Guddal Art Gallery also features a popular café, but the major attraction is the very new Folgefonn Centre, which houses the museum/information centre for the Folgefonna National Park with all sorts of information and displays about the park, the glacier, the fjords, sea trout and what is happening to them (not good), the Gulf Stream plus Norsafe lifeboats which were manufactured here although production seems to have been shifted to China? There are assorted videos of ‘freefall’ lifeboats being launched into the water from a great height. The whole idea seems absurd, but are they necessary for oil drilling rigs?

▲ Lysøen Island was home for Norwegian violinist Ole Bull (1810-1870) who was a major international star during his life. His house is now a museum

▲ And the island is very pretty for walking around.

▲ From Flåm on Sognefjorden we take the steep train trip – the steepest train in the world that isn’t a cable train or rack train, just the friction on the tracks – up to Myrdal on the Oslo-Bergen line. There are lots of tunnels on the way up and it was clearly quite a task to construct, a story that’s related in detail at the Museum in Flåm. You can rent bicycles and coast downhill from Myrdal back to the fjord. On the way down the train stops at the big Kjosfossen Waterfalls where a red-dressed singer – a Huldra forest spirit – appears on the roof of the ruined building to sing to us.

The Flåm Church, we’d passed it on the way up and down on the train, has interesting wall paintings from 1702 to 1704 that were painted over in 1870 because the vicar thought the congregation was paying too much attention to the paintings and not enough to his sermons. They were restored in 1967.

▲ Near Gulen the Gulatinget Sculpture Park is a symbolic ‘thing site’ opened in 2005 to commemorate the annual parliamentary assembly which took place in Gulen from approximately 900-1300 AD. The park features monumental artworks by sculptor Bard Breivik.
,