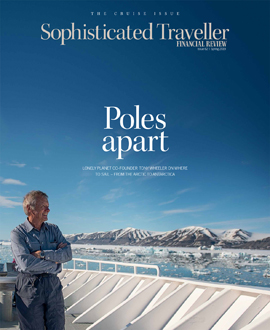 It was my second trip to Norway this year. Visit 1 took me up to Svalbard, way north of the Arctic Circle, and to Svalbard’s intriguingly named capital city Longyearbyen. It also led to a cover story on the Australian Financial Review’s quarterly Sophisticated Traveller magazine. Next issue I’ll be writing about great road trips from the Hippie Trail via the Silk Road to Route 66.

My second Norway trip was with a bunch of friends on a typical fjord excursion. We kicked off in Oslo and took the classic Oslo-Bergen train trip where we started our fjord voyaging, then concluded in Stavenger, the oil capital of Norway. More on the train, Bergen and Stavenger in later postings.

▲ Our fjording was a classic Norwegian excursion, up and down the narrow waterways. The Norwegians have a serious love affair with waterfront holiday homes and if we weren’t travelling along some remote wilderness fjord then we were passing by somebody’s fjord edge (or island edge) weekender. This cute little island getaway was near Bergen.

▲ We did a lot of walking, often in the rain, it does seem to rain a lot in Norway! This fjord-edge walk was the old postal road at Gudvangen, running from Bleiklindi to Styvi on Nærøyfjord,

▲ Looking across that fjord near Dryda I saw the Future of the Fjords electric boat cruising by. There are an awful lot of boats on the fjords, ferry boats crossing from one side to the other or running up and down the fjords or a host of tourist boats.

▲ We didn’t get to Trolltunga above Ringedalsvatnet Lake, it’s one of the most popular walks in Norway so there’s a constant procession of walkers heading up to the overhanging rock. Instagram has a lot to answer for! We did see it from the air. 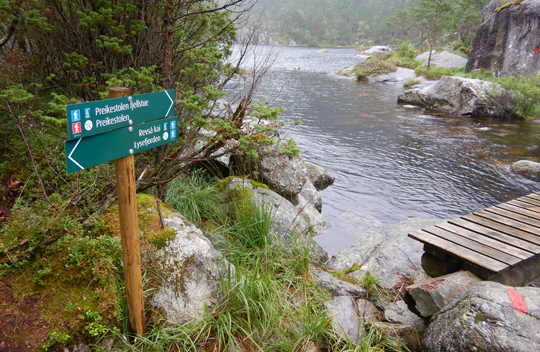 ▲ Nor did we make the trek up to Preikestolen, the rather similar overhanging rock which translates as ‘The Pulpit Rock’ or ‘Preacher’s Chair.’ Yes it’s another Instagram special. Three of us did make the trek up from Lysefjorden to this lake en route to the Preikestolen and the Preikestolen Fjellstue (mountain lodge). It took us rather long than we expected because that regular Norwegian rainfall had turned into a Norwegian deluge which made walking rather interesting. 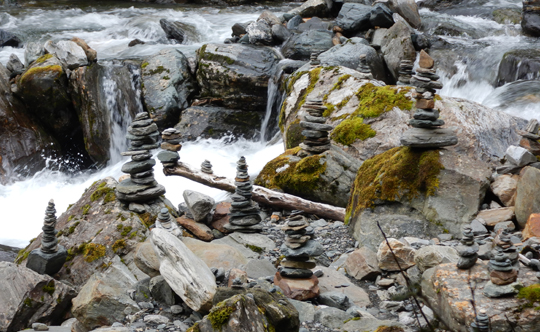 ▲ The little stroll up the Lofthus river valley, where we encountered these stone cairns, was much more comfortable and it was only threatening to rain, not actually pouring down on us. 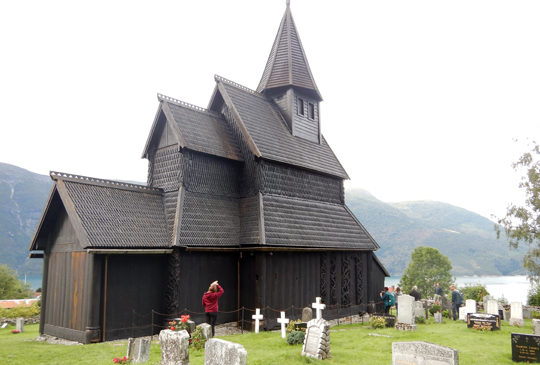 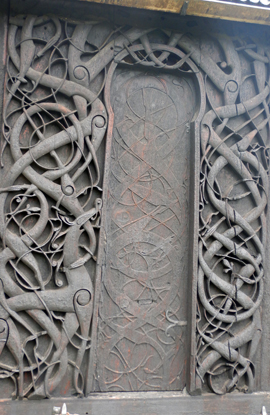 ▲ At Ornes we visited the Urnes Stave Church, an ancient wooden Norwegian church type which I’d never heard of before and knew nothing about. There are 27 stave churches remaining in Norway, hardly any anywhere else, this one dates from 1132 and generally gets the gong for being the best of the lot, it is a World Heritage Site.

◄ The exterior wood carving are said to show Irish Celtic influence, or ‘The intertwined snakes and dragons represent the end of the world according to the Norse legend of Ragnarök.’ There are assorted lines about Lord of the Rings, impossibly cute and so on, well it does date back to the Vikings.