It hardly seems the name for a glamorous destination, but in New York in 2009 you can hardly get more hip than the Meat Packing District. Sandwiched between Chelsea and Greenwich Village on Manhattan’s Lower West Side as the old meat slaughterhouses shifted out they were replaced by fashion (you’ll find Stella McCartney and Alexander McQueen on West 14th), restaurants and very recently two new attractions – the High Line and the Standard Hotel. 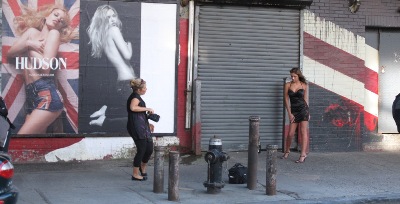 The district seems to be hosting a lot of model photo shoots.

The High Line
An abandoned elevated freight railway line the High Line reopened in mid-2009 as a linear park. It’s been an instant hit and there are plans to extend the current two km section. While I was in New York last weekend the Whitney Museum of American Art announced plans to build a new Renzo Piano designed museum at the Gansevoort St end of the line. 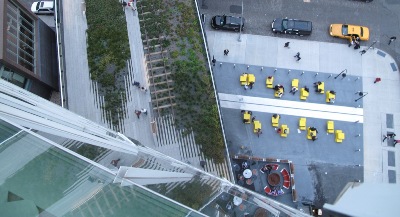 Looking down from my room in the Standard to passers-by on the High Line.

The Standard Hotel
Also new, also a hit, the Standard Hotel straddles the High Line. Externally the architecture looks like it was designed for somewhere in iron-curtain-era Eastern Europe or the old USSR, but inside it’s stylishly modern. The rooms all feature floor-to-ceiling and wall-to-wall glass which seems to have inspired exhibitionist streaks in early guests. Google “Standard Hotel” and “voyeurism” or “naked” to find what went on in the hotel’s early days. Before its recent revamp the Meat Packing District was noted for S&M dungeons and prostitution. 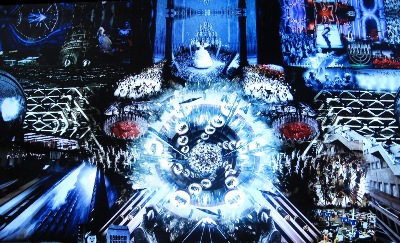 I found the weird screen savers featuring a melange of movies in the elevators, addictive. People ride up and down just to check what’s happening.