Earlier this year I travelled up through the north Solomon Islands and joined a village boat across from Shortland Island to Bougainville in Papua New Guinea. I wrote it up as taking the Back Door to Bougainville, since it’s not an official entry point into the country. The airport for Shortland Island is on another island called Balalae and my visit there pushed me to investigate the Sad Story of Balalae Island, how hundreds of British prisoners of war after the fall of Singapore in WW II had been shipped to the island to build the airstrip and then massacred by the Japanese. 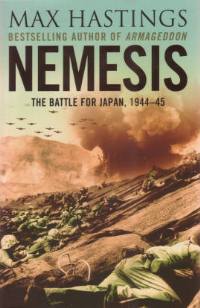 From Bougainville I travelled on to Buka and then to Rabaul, another place with often tragic stories from the closing stages of WW II. Those travels through the Solomon Islands and Papua New Guinea prompted me to read the extraordinarily interesting Nemesis, Max Hasting’s book on the final year and half of the Pacific War. It covers the unrelenting brutality and stupidity of the Japanese, the egoism and tunnel vision of Douglas MacArthur, the pig-headed obstinacy of Australian trade unions and a lot of other interesting opinions.

With Burma much in the news this year it’s fascinating to read, again, about that often forgotten chapter of the Pacific War. There’s another look at the atom bomb finale, but I hadn’t realised that the last minute arrival of the Soviet Union in the war was in fact not quite so last minute, it took quite a time to shift Russian troops from the European front all the way across Russia and into Manchuria where they virtually took the Japanese by surprise. MacArthur wasn’t the only one to suffer from tunnel vision, the Japanese leadership had the same affliction.