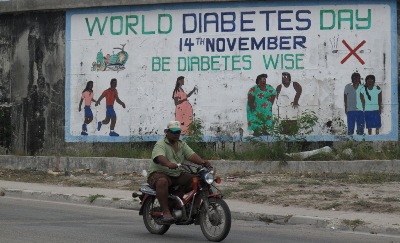 After my spell on the Solomon Islands I carried on to a Pacific nation which gets very few visitors: Nauru. To find Nauru on the map head off north-east from the Solomons and there it is, a dot in the ocean just a stone’s throw south of the equator. 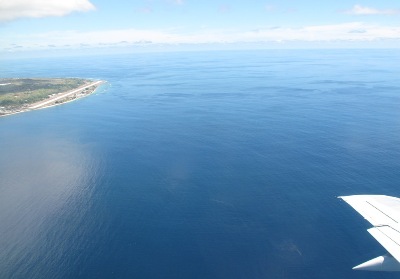 ▲ Flying out of Nauru

For a spell in the ‘70s Nauru was the richest country on earth in terms of per capita income. The 10,000 or so Nauruans were up there with the Saudis and Kuwaitis, but not from oil, from birdshit. Nauru was one big heap of guano, its remote location had made it a key stopover for birds for millions of years and what they’d left behind was prime phosphate, dug up and exported as fertiliser since 1907. The money really began to pour in from the late 1960s and the intention was to wisely invest it, to ensure a steady income once the deposits ran out.

▲ Driving round Topside you encounter these abandoned train cars, used for moving phosphate

Sure enough the deposits have pretty much gone, but so have the investments. When they weren’t being done over by useless banks or fast-talking carpetbaggers the poor Nauruans were burning their money in a series of useless investments including Air Nauru, an airline way too big for the tiny country. It hardly ever carried any passengers apart from rich Nauruans off on shopping trips of course. When the money was gone Nauru briefly turned to money laundering and was reputed to have been the channel for US$70 billion of Russian mafia money. Then there was a spell as a refugee detention centre for the Australian government’s ‘Pacific Solution’, the country’s own version of Guantánamo Bay.

What to do on Nauru?
There’s plenty to keep you occupied for a couple of days. The old phosphate processing plant and loading docks are a slice of industrial archaeology. Three of the four gigantic cantilevers, used for loading the phosphate on to ships, have collapsed although small quantities of phosphate are still being exported. It’s nothing like the activity in the island’s heyday.

Everybody on the island lives right by the coast, inside is ‘Topside’ a bizarre scene of rocky pillars left when the guano was excavated around them. Once upon a time the whole island was covered in dense forest, that all went with the guano. One of the refugee detention centres was on Topside, it’s empty now apart from a few buildings used by the Nauru Rehabilitation Corporation, they operate a plant nursery there. The shallow lagoon all around the island is dotted with those rocky pillars as well, out to the reef edge which then drops off straight into the deep ocean. There’s no natural harbour and no notable beach although the scuba diving on the drop-off could be interesting, if there was a scuba diving operator.

Who goes to Nauru?
Hardly anyone, about 150 tourists a year. A large proportion of those visitors will be people working on going everywhere, intent on putting another tick on their Traveler’s Century Club checklist. Sure enough, the only other tourist arrival on my flight was down to the last 10 countries he had to visit, until he could claim he’d been to every country on earth.

▲ And rock pinnacles on the beach

How do You Get There?
Not with Air Nauru, their last 737 was repossessed in 2005. Taiwan gave them another 737 (on condition they recognised Taiwan as the real China, not that Beijing mob) and Our Airline flies once a week from Brisbane in Australia, continuing on to Kiribati and Fiji and returning 2 days later. So if you want to make a short visit to Nauru it’s 2 days or 9 days. Or 7 if you carry on towards Fiji.

▲ Our Airline’s 737 has to cross the coast road to get from the runway to the terminal.

Visas?
Getting a visitor visa for Nauru requires perseverance although you can do it by email. Just keep on top of them, if you don’t keep asking where it’s got to nothing will happen. Ask Our Airline to email you a visa form to fill in and return to the Brisbane, Australia consulate. Apart from a confirmed airline booking with Our Airline you will also need a hotel confirmation, even though the island hotels are all pretty well empty. You might be asked for the visa confirmation at check in, but you’ll certainly be asked for it on arrival in Nauru when they take your passport away. You must pay the A$100 visa fee when you retrieve your passport later in the day from the government office, right across the runway from the airport terminal. 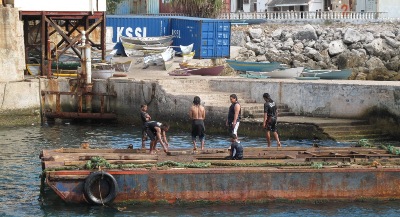 ▲ Kids swimming in the harbour, outriggers are still used for fishing

Money?
Bring Australian dollars with you, Nauru has no banks, no ATM machines and nowhere to change money.

▲ Menen Hotel – the camera lies, it isn’t that good looking! 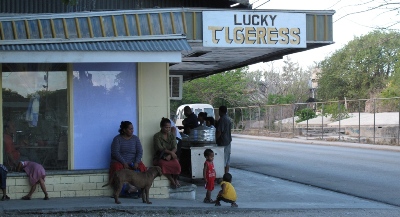 Getting Around?
There is no ‘town centre,’ everything is dotted along the coast road, which makes an 18km circuit around the island. It’s easy to hitch rides, even without sticking a thumb out you won’t be left standing although you might end up on the back of one of the ubiquitous Nauruan ‘postie’ motorbikes. Capelle & Partner, the biggest island store, rents cars for A$85 a day plus fuel. 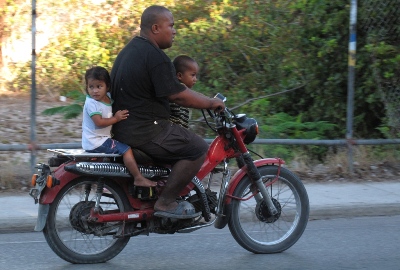