There’s really no reason to come to Nanning; it’s simply a transit stop between somewhere and somewhere else – Kunming and Wuzhou for me (and in fact, Wuzhou is only another transit stop before Macau). On the other hand, it’s an interesting mid-size city (1.5 million versus 3.5 million in Kunming) and once again it’s the New China at full throttle.

First there’s some Japan déjà vu. The train station with its big plaza out front has a definite Japanese flavour, and my hotel is very reminiscent of a Japanese business hotel.

Two of my companions in my sleeper cabin on the train last night were young saleswomen for the Japanese cosmetic company Shiseido, and there’s clearly lots of business for them in Nanning: two department stores I visit are wall-to-wall cosmetic counters. Nanning seems to be very fashion conscious. There’s one brand-new shopping centre which has nothing but clothes and shoe shops, all clearly aimed at a young and affluent clientele. 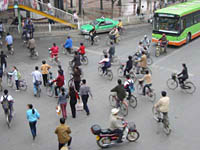 Late in the evening on my way back to the hotel I walk through a park where – forget tai chi – there’s ballroom dancing in full swing. Further on I detour to an internet café I’d tracked down earlier in the day (they can be hard to find until you recognise the Chinese characters) and discover that come night time it’s in the heart of the red light district. No doubt it wasn’t like that during Mao’s time.