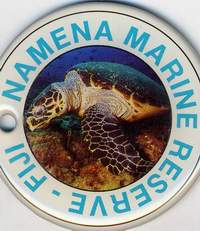 About 40km south-west of Savusavu on the Fijian island of Vanua Levu the reef surrounding the beautiful island of Namenalala has been turned into the Namena Marine Protected Area and as a result has become a Mecca for visiting scuba divers.

A decade of protection from commercial fishing means there is an exceptionally rich variety of marine life on the reef and the F$25 (about US$15) fee charged to visiting divers not only helps compensate the Kubulau District villagers for the loss of fishing territory, but has also paid for mooring buoys for visiting scuba boats to minimise damage from anchors. The success of the Namena MPA has led to the establishment of other protected areas in the district. 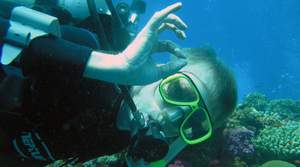 I spent a morning diving at the aptly named Grand Central Station (shoals of fish moved in an out of the gulleys like rush hour commuters converging on station platforms) and the Chimneys (the coral bommies look exactly like a row of industrial chimneys). The marine life, including a white tip reef shark pursued by a shoal of fish intent in keeping an eye on the predator, rather than vice versa, was just as dense and colourful as promised.

The activity was equally energetic above the waterline, between dives we watched the protected red-footed boobies which nest on the island, a major site for seabirds. Turtles also come ashore on the island beaches to lay their eggs and Namena is on the migratory route of dolphin and whale species.